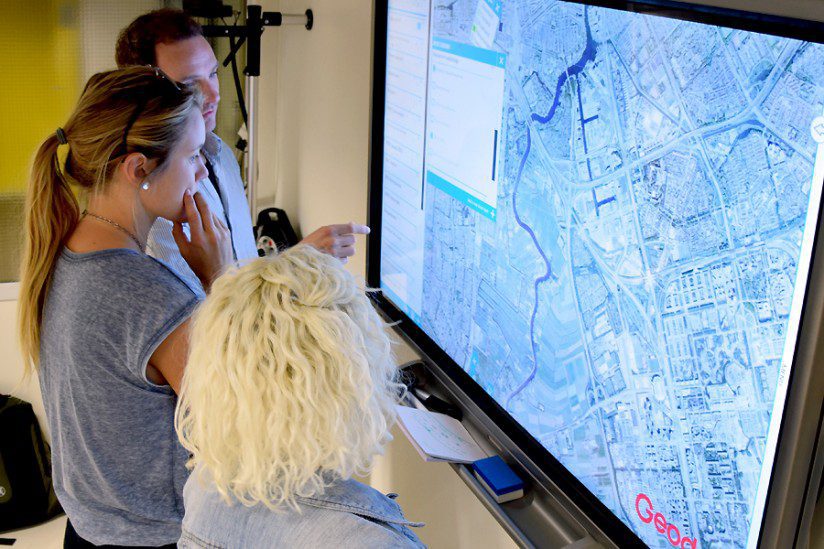 With a GoPro camera strapped to the front of her bicycle, Nicole Bosetti rode through the streets of Amsterdam. Whirring past brick-front cafes and canals, she captured footage of the safe and efficient bike paths available to cyclists.

In Amsterdam, bicycles outnumber the residential population of about 800,000. With more than 250 miles of road dedicated to cyclists, biking is a popular and efficient method of transportation. In fact, it’s a deeply valued part of Dutch culture.

Bosetti, a geodesign major at the USC Dornsife College of Letters, Arts and Sciences, encountered protected bike lanes, which separated cyclists and drivers with physical dividers, and a dedicated set of traffic signals for bicycles. She wondered, “How can we make Los Angeles more bike-friendly?”

“Right now, about 1 percent of commuters in Los Angeles ride bikes to work,” Bosetti said, noting that with 87 percent of Los Angeles County roads at less than a 5 percent grade — meaning they’re mostly flat — the city is ideal for cycling.

Increasing the number of bike commuters in Los Angeles could ease the city’s notorious traffic, cut down on fossil fuel dependence and get residents exercising.

Using strategies she learned in Amsterdam, she presented a proposal to her classmates in the Problems Without Passports class “GeoDesign Practice: The European Experience.”

Led by Darren Ruddell, assistant professor of spatial sciences, students in the course spent two weeks in the Netherlands in June, touring various cities and meeting with experts to learn about urban planning techniques, geospatial technologies and environmental design strategies.

“Geodesign is about providing a better living environment,” Ruddell said. “Cities can have a profound footprint on the environment or there are cities that tread more lightly, so to speak, on the natural landscape. Ultimately, it’s about finding a way to balance human and environmental systems.”

Implementing ideas from the Netherlands

Students met with geodesign professionals at Geodan, a geo-information and analysis technology firm based in Amsterdam. They received a demonstration of Geodan’s novel spatial technology, the Phoenix touch table. The tablet, which is the size of a table, allows spatial science professionals and community members to provide input on the same project.

“The entire purpose of the Phoenix table is to better connect the community with officials on a particular project,” Bosetti said.

Geodesign major Eleanor Ouyang’s proposal focused on improving the pedestrian experience in LA. She noted that most pedestrians in the city walk on pavement — which is not ideal in a warm climate — with little or no signage pointing out major landmarks.

Her recommendations were to increase grass and trees along pathways, provide more barriers between pedestrians and traffic, and create more signage pointing out historic landmarks.

Bosetti’s final recommendations included incorporating elements of Amsterdam’s engineering and design to create safer streets for cyclists in LA. Right now, she noted, the majority of bike lanes in the city position riders between traffic and parked cars, a dangerous combination.

“In LA we need to redefine what a safe bike lane is,” Bosetti said, suggesting the idea of creating buffers between cars and cyclists as they do in Amsterdam.

“In Amsterdam, there’s not much room on the streets, but they make it work,” she said.