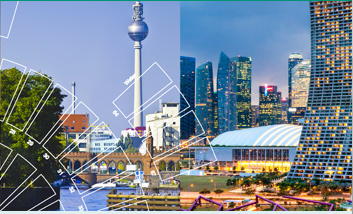 The Fraunhofer-Gesellschaft’s Morgenstadt Innovation Network honored the first winning city of the Morgenstadt City Challenge at its network meeting in Vienna. The aim of the competition, which runs until October, is to support cities in their efforts to become more future ready. Prague now has the opportunity to implement its concepts and visions using the Fraunhofer Morgenstadt model.

The move toward CO2-neutral, energy-efficient and climate-proof cities of the future calls for new solutions and strategies. So far, twenty cities across Germany and the rest of Europe, each with corresponding plans in place and seeking help to implement their strategies, have applied to take part in the Morgenstadt City Challenge competition. The first winner has now been chosen from among those cities that submitted complete applications to the initial selection round. The competition was launched by the Fraunhofer-Gesellschaft’s high-profile Morgenstadt Innovation Network, which will support the three winning cities on their way to improved sustainability using the new Morgenstadt model.

In the first of two selection heats, Prague won the jury over with a series of urban development projects it already has in motion. These included plans to continue the successful development of Prague Airport over the coming years. The city has created a challenging mix of new-building and renovation projects by working up a series of mixed-use neighborhoods. For Prague, the successful transition to sustainable mobility and energy systems is a high priority.

Tomás Ctibor, head of the Prague Institute of Planning and Development, presented a convincing but fledgling strategy process for sustainable urban development to the panel of twenty network partners made up of industrial and city representatives and Fraunhofer researchers.

One of the main factors that influenced the jury’s decision was the clear commitment shown to the plans and upcoming investments by the city’s key decision-makers. The project has the full support of all urban departmental heads, the mayor and the city council, a great many of whom turned out to attend the network meeting.

Dr. Eckhart Hertzsch, deputy chairman of the Morgenstadt: City Insights Innovation Network and head of the National Platform for the City of the Future, presented the winner’s certificate to the European cultural capital’s official representative. “Our research trips to the various cities taking part in our project already revealed numerous interesting examples of practical ways in which cities are tackling the very different challenges they face. Prague is an important and exciting addition to our research network,” emphasized Alanus von Radecki, project manager for Morgenstadt: City Insights, a sub-project of the Morgenstadt (city of tomorrow) initiative. He is looking forward to the forthcoming collaboration with the city, as the next step involves using the newly developed Fraunhofer Morgenstadt model as a basis for taking their ideas further and putting them into practice.

The German city of Darmstadt also managed to secure numerous votes with its ideas and concepts, and is still able to apply for selection in the second round of the Morgenstadt City Challenge. The competition is open to major cities with more than 100 000 inhabitants and a clearly defined sustainability strategy. Competitors have until October 10, 2014, to apply for the opportunity to rank among the pioneers of sustainable urban development.