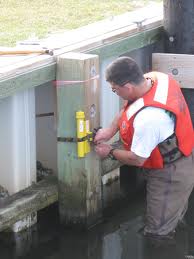 A team from the USGS New York Water Science Center is surveying 124 locations in the state, determining their elevations and installing receiving brackets at those sites that will hold a network of sophisticated sensors that can be installed days-to-hours before a storm makes landfall. The network, which will include 763 locations from Virginia to Maine, will dramatically decrease the time it takes to provide FEMA, NOAA and other agencies information they need to help tailor their response and recovery efforts.

“The new network of pre-positioned receiving brackets and follow-on sensors is going to enable the USGS to collect more information on how storm tides are impacting communities and deliver it to emergency managers and responders more quickly,” said Robert Mason, a hydrologist with the USGS. “The information will enable the responders to better track flood impacts, assess flood damage, and rush the right assistance to flooded communities.”

Installing storm-tide sensors to track and measure storm tide inundation is not new to the USGS; they were first deployed for Hurricane Rita in 2005. What makes the new network unique is the speed at which the processed information from the sensors will now be available to anyone who needs it.

In past years, the effort involved waiting until there was a fair degree of confidence on where the storm was most likely to make landfall, then quickly deploying numerous crews to install the sensors. The number of miles of coastline the sensors were deployed, and number of sensors installed, depended on the area forecasted to receive the greatest surge from the storm.

With the new network of pre-surveyed locations with pre-installed brackets, the time required to install and retrieve the sensors and process the data will be cut to days.

During a storm these sensors record the precise time a storm tide arrives, the depth of the storm tide throughout the event, the height and frequency of storm-driven waves, the change in inland and ocean water levels during the storm, and the time for the water to recede.

The information is not only of immediate use to agencies responding to storm surge and coastal flooding, it helps scientists develop more accurate storm-tide models, leading to better predictions of flooding ahead of storms and better simulations of long-term, future flood patterns and trends. This information in turn will help engineers as they design flood hardened structures and assess the damage reducing impacts of existing or engineered dunes and wetlands. It will help community leaders prepare their communities for future storm-tide flooding, develop better land use practices and update building codes.  Ultimately, the information helps those building more resilient coastal communities.

The new USGS network configuration also includes locations that cross selected barrier islands, wetlands, and urban areas that will enable scientists to measure the effect of topography, vegetation, and structures on wave height and frequency – important factors that dramatically influence storm-tide heights and that are at the center of the National debate about the appropriate role of coastal wetlands in flood mitigation.

In addition to surveying and installing brackets for storm-tide sensors, the USGS is also doing the same for a series of rapid deployment gauges.  These real-time gauges, used to help forecast floods and coordinate flood-response activities, are installed at critical locations and provide data via the web to local, state and federal emergency-response agencies.

The bracket installations and site surveys should be complete by late summer.

In addition to monitoring the coastal impact of storms, the USGS continuously monitors water levels and discharge at more than 7,500 stream gauges across the Nation on a real-time basis. Information on water levels throughout the country can be accessed at the USGS Current Streamflow Conditions web page. The USGS also has a “push” system called WaterAlert that texts or emails real-time information to subscribers on when waters are rising in rivers or streams near them.