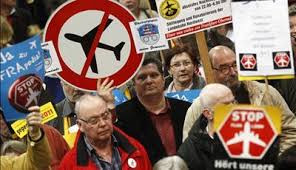 Wherever ambitious construction ventures loom on the horizon in Germany — from the cities to the countryside, from the coastlines in the north to the Black Forest in the south — opponents are taking to the streets.

More often than not, the demonstrators are protesting against projects that stand for change: extensions to airports, railways, new wind farms or power lines. Not even new subways or sports stadiums are exempt.

“Infrastructure developments have always been society’s flagship projects, a symbol of progress,” says Torsten Albig, governor of the northern state of Schleswig-Holstein. But as the public’s enthusiasm for constant innovation has lessened, so has the appeal of these sorts of projects, and, as a result, they now inevitably come accompanied by picketers.