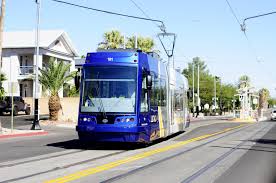 “The new Sun Link Streetcar line is a great addition to Tucson’s growing transit network, connecting residents and students with work, school, and other ladders of opportunity, while also spurring tremendous economic development that creates jobs in the city,” said U.S. Transportation Secretary Anthony Foxx. “This Administration would like to build more projects like this one in other communities across the country, but we need Congress’ help to pass a long-term funding bill to meet the rising demand for more and better transportation choices.”

The new four-mile streetcar route connects the University of Arizona and the University of Arizona Medical Center with the Tucson Convention Center, the 4th Avenue Business District, the historic downtown area, and the Mercado District under development west of Interstate 10. Riders can easily transfer from selected streetcar stops to Sun Tran bus service and the university’s Cat Tran shuttle service. The Downtown Tucson Partnership estimates the project created approximately 500 construction jobs and has generated roughly $1.5 billion in public-private investments along the corridor, including more than 1,500 new housing units, restaurants, and retail.

“Roughly 100,000 people live within a half-mile of one of the new Sun Link streetcar stations, and that’s great news for everyone looking for an opportunity to leave their car at home and take transit instead,” said FTA Chief Counsel Carter. “We must continue to invest in transportation projects like this one that help the local economy to grow and give working families a chance to succeed.”

Tucson’s eight zero-emission streetcars were manufactured in Portland, Oregon, by United Streetcar, a U.S.-owned manufacturer of modern streetcars. The Tucson Streetcar is one of two federally-funded streetcar systems in America, along with the Portland Streetcar, to take delivery of modern streetcars from a U.S.-owned streetcar manufacturer in the last 60 years. United Streetcar is a beneficiary of the federal government’s Buy America regulation, which requires at least 60 percent of the content of transit vehicles to be produced domestically. Through Buy America, FTA helps to ensure that transit vans, buses, streetcars, and rail cars funded with taxpayer dollars are built in the U.S. using American-made materials and labor—which in turns helps to preserve and grow domestic manufacturing jobs.

To strengthen domestic manufacturing and innovation, President Obama’s GROW AMERICA Act would gradually increase the domestic content requirement for transit vehicles from 60 percent to 100 percent by 2019.

In addition to the DOT TIGER funds, FTA invested $19.7 million in other DOT funds toward the $196.5 million Sun Link Streetcar project.