A National Vision is Needed for Comprehensive Coastal Risk Management 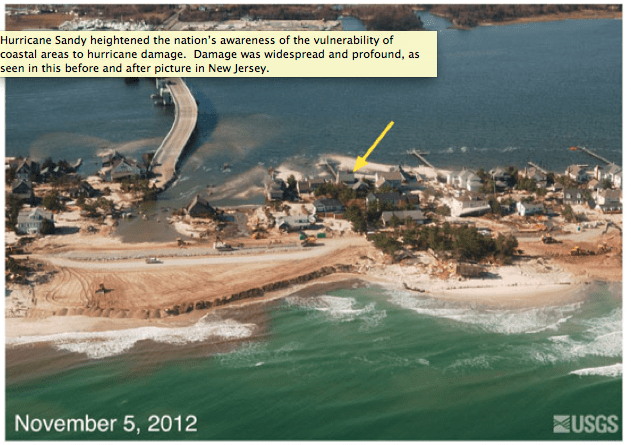 A national vision for coastal risk management that includes a long-term view, regional solutions, and recognition of the full array of economic, social, environmental, and safety benefits that come from risk management is needed to reduce the impacts of natural disasters along the Atlantic and Gulf coasts of the United States, says a new report from the National Research Council.  To support this vision, a national coastal risk assessment is needed to identify coastal areas that face the greatest threats and are high priorities for risk-reduction efforts.

The report defines coastal risk as the potential for hazards, such as storm-surge-induced flooding and wave damage, to adversely affect human health and well-being, economic conditions, infrastructure, support services, and social, environmental, and cultural resources in coastal communities.  In recent years, an increase in the population and property located in hazardous areas has contributed to a dramatic rise in coastal-storm-related losses.  Climate change poses additional threats to coastal communities from sea-level rise and possible increases in the strength of the most intense hurricanes.

“There is a misalignment of risk, reward, resources, and responsibility related to coastal risk management, which has led to inefficiencies and inappropriate incentives that ultimately increase coastal risk,” said Richard A. Luettich Jr., professor of marine sciences at the University of North Carolina, Chapel Hill, and chair of the committee that wrote the report.  “There is a crucial need for collaboration among federal agencies and between the federal government and the states, as well as policy changes that will help us evolve from a nation that is primarily reactive to coastal disasters into one that invests wisely in risk reduction and resilience,” he said.

Responsibilities for coastal risk reduction are spread over a number of federal, state, and local agencies, with no central leadership or unified vision.  The financial burden associated with coastal storms falls largely on the federal government, and the vast majority of funding is provided only after a disaster occurs.  Funding is limited for mitigation, preparedness, and planning, and little attention has been directed at prioritizing efforts at national or regional scales to better prepare for future disasters.  In addition, builders and developers bear almost none of the risk, and local and state governments, which rely upon the tax revenues of coastal development, have few incentives to limit initial development or post-disaster rebuilding in hazardous areas, the report says.

Coastal risk management strategies can include built or natural infrastructure to reduce flood hazards and wave damage in at-risk areas as well as steps to move people and property out of harm’s way.  Structural strategies to reduce storm-related hazards include seawalls, levees, flood walls, and storm-surge barriers, as well as beach nourishment, dune building, and restoration or expansion of natural habitats.  Conversely, elevating existing structures, relocation, and land-use planning to deter future development in high-hazard areas can reduce the number of people or buildings at risk.  The committee found that in the past, most risk reduction projects have focused on fortification, with few efforts to limit redevelopment in high-risk areas and steer development toward safer, lower-risk areas.

Strategies for coastal risk reduction differ in terms of their benefits, costs, and ecosystem impacts.  At the local, state, and national levels, society needs to determine which investments to make and whether they are justified.  One method for choosing investments is a risk-standard approach, which focuses on strategies to reduce risk below an acceptable level.  Alternatively, a benefit-cost approach recommends strategies in which the benefits exceed the costs, and therefore results in varying levels of risk along the coast.  The report recommends a hybrid approach that emphasizes investments that optimize net benefits, but puts constraints on what is considered acceptable risk, particularly for human fatalities and cultural and social resources, which can be difficult to account for in monetary terms.

A national perspective is needed to achieve the most benefits from federal investments and provide regional solutions, rather than piecemeal, project-by-project approaches.  To achieve a national vision, the federal government should work with states to develop a national coastal risk assessment along with objectives and metrics for risk reduction to identify appropriate actions and measure progress.  The resulting geographic patterns of coastal risk, represented by human fatalities, economic losses, and social impacts, could illustrate areas most in need of targeted risk reduction interventions.  The assessment should include an inventory of present and future coastal conditions — especially in light of long-term sea-level rise.

Leadership at the federal level and consistent collaboration with clear delineation of responsibilities for local, state, and federal agencies is needed.  The report recommends that the federal government provide stronger incentives for cost-effective coastal risk management strategies and land-use planning at the local level.  The U.S. Army Corps of Engineers, which requested the Research Council study, could also capitalize on opportunities within its existing framework, such as rigorously accounting for social and environmental costs and benefits, to support a more holistic view of coastal risk management.