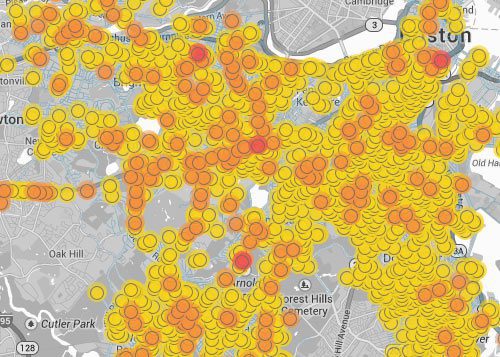 Maps for each city are available at http://edf.org/methanemaps. They constitute the first phase of a pilot project developed using specially equipped Google Street View mapping cars, under a partnership between EDF and Google Earth Outreach to explore and unlock the potential of new sensing and analytical technologies to measure environmental indicators in ways that have been difficult or impossible until now, and to make that information more accessible to everybody.

EDF also worked closely with several leading utilities to validate the findings, which offer a valuable new way for both system operators and regulators to focus and accelerate upgrades. Visitors to the website can nominate their communities as future candidates for the mapping project.

“New technology has given us vastly greater ability to make environmental data available for everyone to see, and to use that information to solve environmental problems by making better decisions,” said EDF’s Chief Scientist Steven Hamburg. “Methane leaks are a pervasive challenge throughout the natural gas industry. This is an ideal chance to put new science to work and to solve a major real-world challenge.”

The maps were created using three Google Street View cars specially equipped with sophisticated methane sensing technology. EDF and researchers at Colorado State University spent two years experimenting with the system and developing analytical tools to not only locate, but also accurately assess the amount of gas escaping from even small leaks detected amid 15 million individual readings collected over thousands of miles of roadway.

“Environmental quality is an issue that affects everyone. Making this information more accessible can make a meaningful difference in people’s quality of life,” said Karin Tuxen-Bettman, Program Manager for Google Earth Outreach. “This pilot project is meant to explore and understand the potential for EDF and others to map and visualize important environmental information in ways that help people understand both problems and solutions.”

Natural gas utilities routinely monitor their systems for safety, as required by state and federal regulations. But current methods involve specialized personnel and equipment, and until now it was difficult to determine how much gas is escaping from a given a leak. While major leaks are typically fixed quickly, vast numbers of others wait months or years for repair. By showing just how much gas is escaping, the technology developed by EDF and Google Earth Outreach illustrates the true scale of the problem.

“We are taking action, accelerating natural gas pipeline replacement to reduce leaks while enhancing safety and reliability, and this kind of technology and data offers valuable insights,” said Susan Fleck, vice president, Pipeline Safety for National Grid. “We’ve taken a leadership role on a national level and support initiatives underway to reduce methane emissions. There is a significant investment that comes with these improvements and that can have an impact on our customers. We are committed to reducing our greenhouse gas emissions by working with our regulators and elected leaders to develop appropriate funding mechanisms and policies to achieve these goals.”

Leaks occur throughout the natural gas supply chain. Until recently, little was known about exactly how much was being lost or where. So in 2012, EDF embarked on the largest research project in its 47-year history: Sixteen independent studies to better understand how much methane is escaping as it makes its way to the end user. In addition to the work with Google Earth Outreach, these efforts include studies of well sites, processing facilities, and long distance pipelines, as well as commercial trucks and refueling stations.

“Until now, these smaller leaks have not been a priority in most places. Yet we can see from these maps just how much they can add up,” said Mark Brownstein, EDF Associate Vice President & Chief Counsel for Natural Gas. “By pulling vast amounts of information together in a place that offers simple, clickable visualization, the platform is going to be an important advocacy tool, one that helps shift resources to an area of historic underinvestment.”

EDF and Google Earth Outreach will be mapping methane leaks in more cities as part of the current project, and they will begin working to map other air pollutants this summer. The EDF algorithms will be published in a peer-reviewed scientific paper later this year, and made available on an open-source basis.

Readers should note that the current maps were generated based on months of testing and analysis, with each leak verified with at least two sampling runs on dates noted on the maps. While they constitute a thorough and accurate picture of conditions at the time of measurement, the information in the maps has not been updated to reflect real-time status. Some of the leaks on the maps could have been repaired, while others may have developed. Anyone who smells gas, or is otherwise concerned about a leak in their neighborhood should contact their local utility immediately.