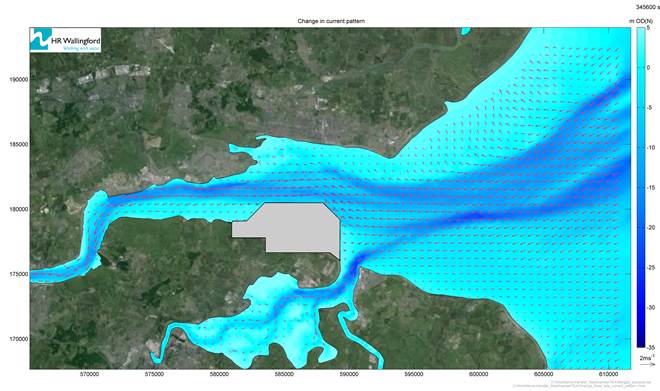 The Airports Commission is examining the need for additional UK airport capacity and recommending to UK Government how this can be met in the short, medium and long term. In January 2014, the Commission called for evidence to inform study outputs for feasibility work on an inner Thames Estuary airport proposal. HR Wallingford submitted an independent response to this call for evidence. The Commission has now published a consultation note on its feasibility study findings on environmental impacts.

HR Wallingford is in a unique position to respond with evidence for the feasibility study, having a 60-year track record of examining major infrastructure developments on the Thames Estuary. We hold specialist numerical models for the Thames that can be used to assess the impact of such developments on the estuary.

For the evidence call, we conducted a preliminary assessment of a typical inner Thames Estuary proposal, located in the inner estuary at the Isle of Grain. Using our in-house hydrodynamic models of the Thames Estuary (developed in conjunction with the Port of London Authority and the Environment Agency), we assessed the potential effects of an airport on estuary tidal flow magnitude, directions and water level, and on wave propagation. This provides an initial indication of the scale of possible effects of an inner Thames Estuary airport on navigation, flood defence and estuary habitats.

Our preliminary technical assessment concluded that an inner estuary airport would lead to profound changes in the wider estuary environment, probably of a scale not seen on the estuary for a century or more.  For example, beyond the direct footprint of a scheme, we have provisionally estimated that approximately 2,500 ha of intertidal estuary habitat is indirectly at risk of change from the assessed scheme.

With refinements to the airport platform, we believe it should be possible to reduce the scale of changes to the estuary, but it will not be possible to eliminate them altogether.

HR Wallingford’s submission was prepared and submitted on a pro bono and independent basis, to support an evidence-based review of airport options. Our full response to the Call for Evidence can be download from our ePrints repository or from the Airports Commission.

In response to the publication of the Airports Commission’s consultation note on environmental impacts, Dr Mike Dearnaley, Director at HR Wallingford, said: “We are delighted that the Airports Commission has found our evidence of use for their feasibility study. With our long track record and specialist environmental expertise for the Thames, we hope to continue to contribute to the examination of airport proposals in the estuary.”

HR Wallingford is an independent engineering and environmental hydraulics organisation. We deliver practical solutions to complex water-related challenges faced by our international clients. We have been providing independent advice on the design and impact of major infrastructure projects in the Thames Estuary for over sixty years. This has included various estuary infrastructure such as bridges, ports, jetties, reclamations, river training works and dredged channels. The expertise and tools we have developed over this period allow us to rapidly and efficiently assess the implications of large scale infrastructure developments in the estuary.
Our recent activities include studies to support the design, environmental impact assessment and construction of London Gateway Port, the redevelopment of Blackfriars Railway Bridge, studies throughout the estuary fundamental to estuary flood risk management (TE2100) for the Environment Agency, and work to investigate the impact of the Thames Tideway Tunnel development on the river.
www.hrwallingford.com