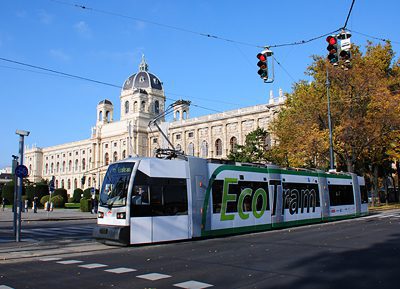 As part of the “Ecotram” research project, Wiener Linien’s energy-saving tram was used on Line 62 in Vienna until the beginning of May. During its ten months in operation, the Ecotram collected valuable data on its power requirement in passenger service. The result: it saved up to 4,200 kilowatt hours (kWh) of energy, more than 13 percent, on heating, ventilation and air conditioning. That is roughly equal to the energy consumed annually by an average household in Austria.

Since 2009, the Viennese tram operator Wiener Linien has been working together with its partners Rail Tec Arsenal (RTA), SCHIG mbh, Siemens, TU Wien and Vossloh Kiepe on this project supported by the Climate and Energy Fund. The first phase of the project involved the collection of data using a series-produced Ultra Low Floor (ULF) tram in a climatic wind tunnel and in regular line service. This data was used to develop efficiency improvement measures, which were subsequently incorporated in a prototype vehicle – the EcoTram. After further testing in the climatic wind tunnel, the Ecotram was deployed in passenger service.

The test tram benefits from a wide range of energy-saving features such as a cooling and heating system with predictive control, CO2 sensors to ensure an optimal supply of fresh air, a multi-stage cooling system and special sunlight-inhibiting window foils. Furthermore, it was also the first time that a heat pump had been installed in a tram to make use of the ambient heat and cold for energy-efficient heating and cooling. “In the past 5 years we’ve been able to gain valuable insights into the energy-saving potentials of trams, and also test new technologies in regular line service,” reports Günter Steinbauer, General Manager of Wiener Linien, enthusiastically about the successful completion of the research project.