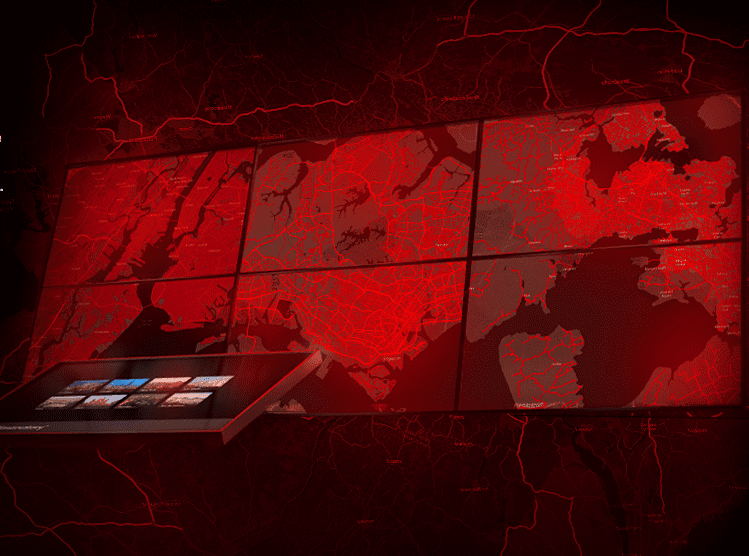 Last year, Richard Saul Wurman, @RadicalMedia, and Esri unveiled the Urban Observatory, which began the process of encouraging cities to use the common language of maps to understand patterns in diverse data sets. The next generation of Urban Observatory will make its global debut at the 2014 Esri User Conference in San Diego, July 14-18.

“Our world has always had big data surrounding us that, until recently, has remained untapped for any real understanding,” said Wurman. “We are several iterations into developing a common language for mapping urbanization. It will allow cities to understand not only the major threads of their performance, land use and contents comparatively, but eventually the nuance of change and action.”

The Urban Observatory is a first of its kind interactive exhibit‹aiming to make the world¹s data both understandable and useful by giving people the ability to compare and contrast data from cities worldwide­with one touchscreen.

“Can you imagine the joy of that moment when pictorial representations of people and animals allowed us to cement our memories and meanings and showed common observations of the same piece of information?” said Wurman.  “The map is a pattern made understandable. Well, that is what we are doing.”

At least half of the world’s population is currently living in urbanized areas. The Global Health Observatory (GHO) projects that by 2050, 7 out of 10 people will live in a city. This year, nearly 60 cities are part of Urban Observatory, a noticeable leap from the 10 included in last year¹s premiere. Its founders attribute the rapid increase to cities wanting to learn more about themselves and each other.

“A couple of years ago (Esri founder and CEO) Jack Dangermond introduced a poster with the phrase Understanding Precedes Action, which resonated with people,” said Wurman. “Last year the headline read You Only Understand Something Relative to Something You Understand. This year the theme, representing where we are today with the Urban Observatory, is Transforming Big Data to Big Understanding.”

Participation in Urban Observatory is open to every city­across the globe. If your city has data it would like to share, it is eligible to be included. In February 2015, Urban Observatory will go on permanent display in the Smithsonian Institution.

“Now is the time for us to learn from each other and to understand this extraordinary and rapidly expanding globe of cities relative to one another,” said Wurman. “It is key that these cities speak the same visual language. We can take the big data of these cities‹the numbers that have to do with population, health and well-being, education, work, crime, money‹and understand each other.”

For more information, go to www.urbanobservatory.org.

Since 1969, Esri has been giving customers around the world the power to think and plan geographically. The market leader in GIS technology, Esri software is used in more than 350,000 organizations worldwide including each of the 200 largest cities in the United States, most national governments, more than two-thirds of Fortune 500 companies, and more than 7,000 colleges and universities. Esri applications, running on more than one million desktops and thousands of Web and enterprise servers, provide the backbone for the world’s mapping and spatial analysis. Esri is the only vendor that provides complete technical solutions for desktop, mobile, server, and Internet platforms. Visit us at esri.com/news.