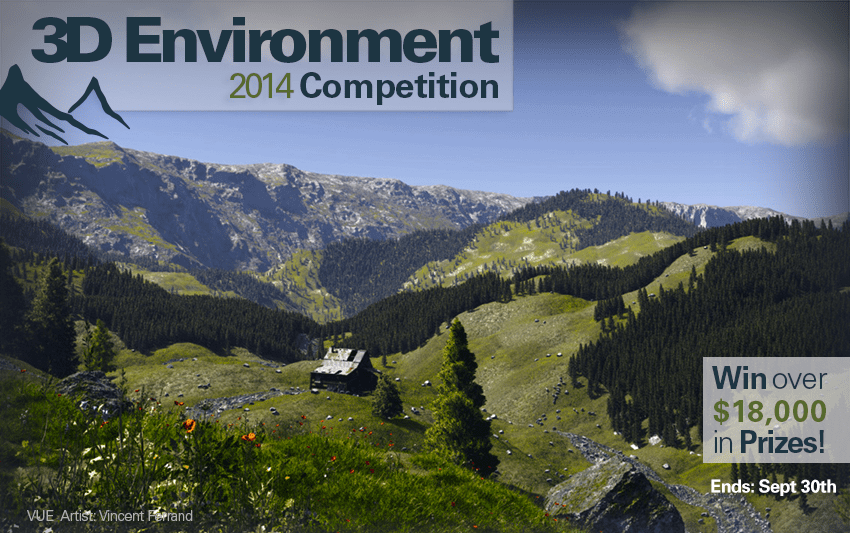 With over $18,000 worth of prizes, the 3D Environment 2014 represents one of the biggest competitions e-on software has ever organized!

Entrants may use their application of choice, in combination with any of the e-on software products. This includes any version of VUE, including the free Personal Learning Edition and the free VUE Pioneer, as well as Plant Factory, Carbon Scatter, Ozone, and LumenRT (and their respective free versions)!

Judging will be based solely on the quality, realism and artistic merit of the entries, not on the software version used to create them.

With 11 prestigious judges representing the different fields of the 3D Industry, this competition is a unique chance for artists to have their work exposed to the eyes of industry experts, as well as winning an extensive set of 3D tools and resources.

The “3D Environment Competition 2014” judges are all leading figures in the world of 3D graphics, representing the Motion Picture, Game, Media and Broadcast industries, including several VES and Emmy award winners:

Extensive Set of 3D Tools and Resources to be Won!

Together with 3Dconnexion, 3dtotal, 3DWorld magazine, Ballistic Publishing, CG Society, Cornucopia3D, GeekAtPlay, Pixologic and QuadSpinner, e-on software will be awarding over $18,000 worth in prizes!

More information and submission guidelines are available at: www.e-onsoftware.com/competition