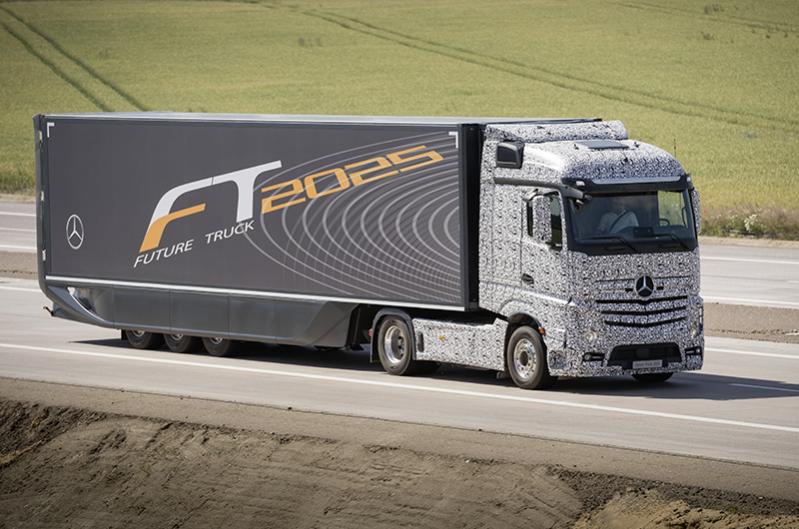 Mercedes-Benz presents the “Future Truck 2025” as the world’s first autonomously driving truck. A truck drives along a motorway all by itself, at a speed of 80 km/h, communicating with its surroundings and ensuring more safety on the roads. It also saves its operator money, and relieves its driver of stress and fatigue in monotonous traffic situations.
Sounds like science fiction? Think again, as it is already here today – the Future Truck 2025 from Mercedes-Benz.

The Highway Pilot system enables this truck to drive autonomously at a speed of 80 kilometres per hour. With it we are presenting the long-distance truck of tomorrow, and giving an outlook on the transport system of the future. It is based on intelligent networking of all the safety systems already available, plus cameras, radar sensors and vehicle-to-vehicle communication.

There are many challenges facing the road transport sector: Despite increasing traffic density, investment in the infrastructure is in decline. Added to this are increasing cost pressure on transport operators and the already acute shortage of drivers. Daimler Trucks has an answer to all this – the truck of tomorrow: safer, more efficient, highly networked and autonomous.
Thanks to autonomous driving, the transport sector could look like this in only ten years: Traffic flows are smoother, more predictable and safer. Human error behind the wheel is avoided. Freight forwarders operate more profitably and flexibly. The professional profile of the truck driver has undergone a change – from a trucker to a transport manager with far more responsibilities.

Read more, and see more videos, on the Daimler website.