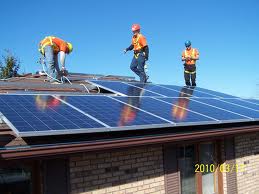 In support of the President’s Climate Action Plan, the Department of Energy issued a loan guarantee solicitation today, making as much as $4 billion in loan guarantees available for innovative renewable energy and energy efficiency projects located in the U.S. that avoid, reduce, or sequester greenhouse gases. This solicitation represents the next step in the Department’s commitment to support the deployment of innovative, clean energy technologies at commercial scale in the U.S.

“As the President emphasized in his Climate Action Plan, it is critical that we take an all-of-the above approach to energy in order to cut carbon pollution, help address the effects of climate change and protect our children’s future,” said Secretary Ernest Moniz. “Investments in clean, low-carbon energy also provide an economic opportunity. Through previous loan guarantees and other investments, the Department is already helping launch or jumpstart entire industries in the U.S., from utility-scale wind and solar to nuclear and lower-carbon fossil energy. Today’s announcement will help build on and accelerate that success.”

The Renewable Energy and Efficient Energy Projects Loan Guarantee Solicitation is intended to support technologies that are catalytic, replicable, and market-ready. Within the solicitation, the Department has included a sample list illustrative of potential technologies for consideration. While any project that meets the appropriate requirements is eligible to apply, the Department has identified five key technology areas of interest: advanced grid integration and storage; drop-in biofuels; waste-to-energy; enhancement of existing facilities including micro-hydro or hydro updates to existing non-powered dams; and efficiency improvements.

During the 30-day public comment period, the Department held six public meetings around the country and accepted written comments online.  The solicitation issued today addresses many of those comments and the full public comment record is available online.

Currently, the LPO supports a diverse portfolio of more than $30 billion in loans, loan guarantees, and commitments, supporting more than 30 projects nationwide. The projects that LPO has supported include one of the world’s largest wind farms; several of the world’s largest solar generation and thermal energy storage systems; and more than a dozen new or retooled auto manufacturing plants across the country.