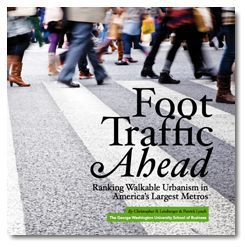 Walkable real estate development projects and places are on the rise nationwide, but certain metro regions are progressing faster than others, according to a new report released today by the Center for Real Estate and Urban Analysis at George Washington University School of Business in conjunction with LOCUS: Responsible Real Estate Developers and Investors, a program of Smart Growth America.

The report, Foot Traffic Ahead: Ranking Walkable Urbanism in America’s Largest Metros, ranks the country’s top 30 metropolitan areas based on the amount of commercial development in Walkable Urban Places (WalkUPs). The study finds higher education levels and one-third higher GDP per capita in high-ranking cities. Additionally, a series of forward-looking metrics examine the future development patterns in these metro areas to predict how walkable or how sprawling their future development is likely to be.

“In a sweeping survey of our nation’s top 30 metro areas, Foot Traffic Ahead reveals just how important Walkable Urban Places are,” said Chris Leinberger, president of LOCUS and author of the report. “As economic engines, as talent attractors, and as highly productive real estate, these WalkUPs are a crucial component in building and sustaining a thriving urban economy. Cities with more WalkUPs are positioned for success, now and in the future.”

“This is an important study underlining the economic power of walkable places, and identifying which metro areas are adding them fastest,” said Geoff Anderson, president and CEO of Smart Growth America. “Cities that want to thrive in our new economic and demographic realities will need to find ways to create and support more of these dynamic, productive walkable districts that are in high demand.”

While metro areas like Washington, DC, New York City, Boston, the San Francisco Bay Area and Chicago ranked among the top current areas for walkable urbanism, the report found that other cities including Miami, Atlanta and Detroit are well positioned for future growth of walkable places given current efforts in those the communities.

“Creating new Walkable Urban Places is a goal that elected officials and developers alike can get behind,” said Emerick Corsi, President, Forest City Real Estate Services and Development. “Based on the trends in Foot Traffic Ahead, there is the potential for market demand for tens of millions more square feet of walkable urban development—and hundreds of new WalkUPs—in America’s cities. Meeting that demand is an opportunity to create huge value for these communities.”