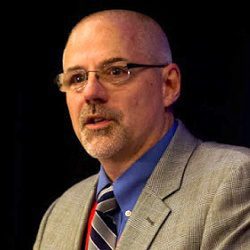 There is ongoing concern about the status of America’s aging infrastructure, and the impacts that this has on human health and economic prosperity. A new report was released today that outlines innovative new ways that the federal government, industry and other stakeholders can work together to solve this crisis. The report ”Making The Grade,” is the result of experts from 45 different infrastructure-oriented organizations setting out a six-part plan for meaningful progress. Informed Infrastructure (I2) editor Matt Ball spoke with Terry Bennett, senior industry strategist for infrastructure at Autodesk about the six recommendations in this report:

I2: How did this effort come about?

Bennett: The premise behind the report is that for any of the articles we’ve seen written or the conferences we’ve attended, we all know that our infrastructure is not where it should be. A lot of the discussion has been around two things, that it’s broken and needs to be fixed, and how to get a higher gas tax to benefit road maintenance and construction. Everything else is usually left out of the discussion.

I speak at a lot of conferences, and visit with a lot of infrastructure executives. Many of the conversations that I’ve had were around what we as an engineering community could do to provide solutions. We pulled together 60 individuals from 45 E&C firms, technology companies, local government, professional organizations, financial advisors, etc. to put together a practical plan.

There’s no easy way to represent all of the opinions from these 45 firms and organizations, because our ideas are all a little different. Instead, we focused on two things that we feel are different about this effort:
We compiled a list of infrastructure areas that everyone agreed were critical.
Looking at those areas, we used them as starting points to help create a framework to leverage action.

It’s taken some time to consolidate ideas down to these six steps from all the different perspectives. The unique thing about this report, and I think it’s unique because I haven’t seen it anywhere else, is that we are looking at a comprehensive approach that applies to all infrastructure at all levels of government from local to federal. It doesn’t give examples on any one area, it’s about transportation, water, dams, levees, sewer systems, roads, bridges, etc. The approach should be holistic to all infrastructure, regardless of their condition or location, and to shift away from infrastructure as siloed group of little projects and start realizing that infrastructure is a series of systems that are integrated components that drive the U.S. economic engine. Without good infrastructure, you have a drag on GDP and jobs. There’s a very causal link between good infrastructure and a prosperous society.

I2: How do you get people to think more holistically about infrastructure?

Bennett: We decided to take a look at this from a system level, rather than a project level. We looked at infrastructure as the nerve center for how we stay competitive in this global economy. We wanted to take a look at best practices, so that we could think about this quantitatively instead of emotionally. We want to use this as a starting point to leverage and foster serious communications and to move it forward. The recommendations in the report are intended to build off each other, with an understanding of the importance of infrastructure in our world.

Natural disasters provide a good context for infrastructure importance, such as when hurricanes knock out New York City or New Orleans, or ice storms shut off the power to the entire Northeast. Infrastructure is the lifeblood of the economy, and yet we don’t have leadership whose responsibility is to leverage best practices, whether it is planning, design approach, or financing and construction. We don’t have a cabinet-level secretary for this, and yet we have cabinet-level representatives for so many other things who have less of an impact on the US economy.

One of the recommendations is to make infrastructure a priority by making it a presidential cabinet-level position. Understanding that infrastructure is naturally local, there’s no reason why there shouldn’t be a chief infrastructure officer for every state, and every large city. This person can bring together and prioritize these projects. We are talking about a $3.6T need by 2020.

Right now, it’s planned in one group, financed in another, the public works director can halt anything they don’t like. If you take a look at the UK and their Chief Construction Advisor that reports to the Prime Minister, they make sure best practices are applied. In parts of Canada, when any project is over $50 million it goes through a public-private partnership (P3) review. It’s not that every project should be a P3, it’s just that every large project should be viewed in terms of the economic value of leveraging private funds for public infrastructure. There are a lot of examples where infrastructure should be made a priority.

I2: You’ve outlined a broader view of infrastructure, why should it be a regional approach?

We could create regions of economic interests, where we foster cooperation and do away with red tape that prevents different jurisdictions from collaborating on projects. The fact that two towns three miles apart have different standards for their sewer system, makes them each more costly to build and maintain. We could much better manage maintenance and capital investments with more collaboration and consistency of approach.

I2: There’s been talk in the past about a national infrastructure bank, how does this plan differ?

Bennett: A national infrastructure bank isn’t new, the difference here is how to do it, not whether it is a good idea. With funds from a national bank, we could accelerate deposits by evaluating projects on the same basis to vet one project against another in terms of priority. You can then compare them objectively and transparently before you spend any funds.

The idea is that lowest cost isn’t best cost if you know infrastructure  should be there for 75 years. There should be a full lifecycle cost analysis with any proposed infrastructure project. This will lead us back to the realization that any infrastructure is a long-term asset and not a short-term disposable commodity.

These recommendations can work at any scale, national, regional or local. You can have the same application process, vetting process, triple bottom line business case analysis for every infrastructure design that goes to a bank. It doesn’t matter if it’s local or regional or national, you will have the same information to vet a water, bridge or infrastructure project against each other at any scale. Banks should leverage each other.

I2: What are “opportunity bonds”?

Bennett: The idea of opportunity bonds goes back to the bonds sold during World War II to fund the war effort, investing in our future for our future. We could also work to repatriate money sitting outside the United States due to unfavorable tax rates. There are ways that we can get the money here to fund the infrastructure.

If you can use modern tools, and 3D modeling tools for design and project delivery, with more integrated approaches, you can make these projects less fragmented and less unpredictable. Then you can attract private investment because they know what their return is going to be.

I2: By what means are you quantifying infrastructure?

Bennett: You have to measure this, whether it’s through an infrastructure ratings index or a combination of sustainable return on investment, there has to be a national infrastructure index. We have a jobs index that tells whether we gain or lose jobs, but it doesn’t tell you how to make jobs. At least an infrastructure index would tell us if we’re going to meet our intended goal, and if not, you’d be able to figure out why, because you’ll have project-based information and metrics. You can validate an infrastructure approach based on this.  We look to the infrastructure rating system ENVISION™ from ISI and the transportation rating index from the US Chamber of Commerce as examples.

Bennett: If we have an infrastructure index, people will start to care about it just like a jobs index. It needs to be structured in a way that relates to jobs and overall economic performance. With that in place, we get stakeholder involvement and local involvement, because they understand the causal affect between what infrastructure is and their daily lives. It’s not just the pothole in the road, it’s the water coming through your pipes, the electricity, and transportation.

Past generations that grew up with the building of the national highway system certainly understand the importance of infrastructure and a national vision on the national economy. We’ve lost that somewhat, and need to get that back.

Having a community vision is important. If you can model a city and help visualize projects, people understand it much better than drawings or reports. If you can tie what you want to build to the lifecycle cost, you’ve modeled design to your ability to finance it. We know that infrastructure cost isn’t going to get cheaper, and we know that we have to deal with being custodians of the infrastructure that we’re handing off to the next generation.

I2: When we look across the world, we see large aspirational projects that leapfrog the kind of infrastructure that we have here in America. Is there a need for a more futuristic leap of infrastructure to get the public excited, because we just don’t get excited about keeping things in working order?

Bennett: There are a lot of iconic projects. The first thing is to understand what people want. The community vision of what their city needs to become will help create what they consider aspirational, and the design community can take off with that. Creating a community vision removes the handcuffs that say that something must be designed in a specific way that in essence hinders innovation. If you’re taking an approach where projects will get funded based on innovation, and solving the  triple bottom line (people, profit, planet) results, then you’ll start seeing a lot more of these futuristic and inspirational approaches.

If you look at the excitement around high speed rail, that’s not futuristic, because it’s been happening in other countries for decades. But, that one thing polarizes people, because it’s hard to deliver something that complex if you don’t change policies and standards with which engineers operate. If you create a checklist that was meant for train travel in the 1930s, it’s a failure before you start.

Innovation does exist, but letting engineers solve hard infrastructure problems, letting them build the business case, and then let it get funded. Until we procedurally let the engineer’s mind imagine, design and create, to let them do all the things they considered in the past but can’t validate due to old regulations, we run the risk of falling behind the cities like Singapore, mainland China, and shortly ones in Latin America, and elsewhere.