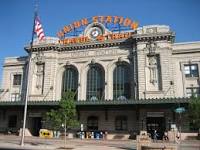 It’s a vision straight out of a transportation planner’s fondest dream.

In the center of the metropolis, the Beaux-Arts façade of a grand old railway terminus, finished in robin egg-hued terracotta stone, is cradled by the daring swoop of a canopy of brilliant white Teflon. On one of eight tracks, a double-decked passenger train has stopped to refuel. A few hundred yards away, German-built light rail vehicles arrive from distant parts of the city, pulling into a downtown of soaring condo towers and multifamily apartment complexes. Beneath the feet of rushing commuters, express buses pull out of the bays of an underground concourse, and articulated buses shuttle straphangers through the central business district free of charge. A businessman, after swinging his briefcase into a basket, detaches the last remaining bicycle from a bike-share stand next to the light rail stop, completing the final leg of his journey-to-work on two wheels.

An out-of-towner could be forgiven for thinking she’d arrived in Strasbourg, Copenhagen, or another global poster child for up-to-the-minute urbanism. The patch of sky framed in the white oval of the Union Station platform canopy, however, is purest prairie blue. This is Denver, a city that, until recently, most people would have pegged as an all-too-typical casualty of frontier-town, car-centric thinking.