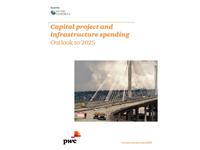 PwC analysis reveals recovery expected to be uneven, led largely by Emerging Asia as spending shifts from West-East. Global capital project and infrastructure spending is expected to grow to more than $9 trillion annually by 2025, up from $4 trillion in 2012, according to a new report from PwC, Capital project and infrastructure spending: Outlook to 2025​.

The report, for which Oxford Economics provided research support, analyses infrastructure spending across 49 of the world’s largest economies which account for 90 percent of global economic output. It estimates the scale of current infrastructure investment and assesses the prospects for future investment from now to 2025.  Overall, close to $78 trillion is expected to be spent globally between now and 2025 on capital projects and infrastructure.

The report finds that during 2011-12, the global infrastructure market rebounded from the global financial crisis, and will continue to grow between 6-7% yearly to 2025.

The recovery will be geographically uneven, led overwhelmingly by Asia, as spending overall shifts from West to East.  The report shows that the Asia-Pacific market will represent nearly 60 percent of all global infrastructure spending by 2025, driven mainly by China’s growth. Western Europe’s share will shrink to less than 10 percent from twice as much just a few years ago.

Long term underlying trends in demographics, technology, natural resources, urbanization and shifting economic power will continue to have an enormous impact on which areas of spending will grow.

“Emerging markets, especially China and other countries in Asia, without the burden of recovering from a financial crisis s, will see much faster growth in infrastructure spending.

“However, megacities in both emerging and developed markets – reflecting shifting economic and demographic trends – will create enormous need for new infrastructure. These paradigm shifts will leave a lasting, fundamental imprint on infrastructure development for decades to come.”

“As economies develop, the types of infrastructure investment needed evolve, but not every country makes infrastructure spending a priority. If you don’t invest when your economy is growing, you may find yourself very quickly at a point where your runways and roads and ports and rail lines are choked.”

In contrast to Asia-Pacific’s success, investment in western economies has been more constrained by the legacy of banking crises, fiscal austerity and a shallow economic recovery. Western Europe’s share will shrink to less than 10 percent from twice as much just a few years ago. While the rate of growth will be slower for mature economies, North America is expected to fare better than Western Europe, where total infrastructure spending in nominal dollar terms is unlikely to reach pre-crisis levels until at least 2020.

“Growth in emerging markets, together with increasing urbanization and shifts in demographics, will drive the majority of investment globally. Infrastructure spending is necessary to provide the basis for security, health and continued prosperity in these economies. It is crucial for policymakers, citizens and businesses to understand the factors that drive demand for infrastructure investment as well as the factors influencing economies’ capacity to invest.”

The PwC report identifies four drivers of future infrastructure spending over the coming decade, including: