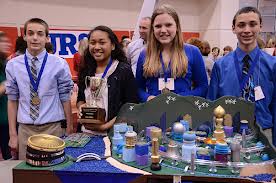 This year’s Future City Competition essay question is “Feeding Future Cities,” and students will be required to design an innovative way to provide food in metropolitan centers.

Many thousands of years ago, humans learned to domesticate animals and grow plants for food. Because we no longer needed to hunt and gather, we could stay in one place and start to build cities.  It was the beginning of civilization.  Today, agriculture is the largest global enterprise on earth. And while some regions still farm in ways similar to our ancient ancestors, for most of the world the mechanization of planting and harvesting, chemical fertilization and pest control, advanced irrigation, and other modern farming tools and techniques led to increased crop output-which, in turn, became a major contributing factor to rapid population growth.

By 1900, the global population was roughly 1.7 billion people. In 2050 it is expected to exceed 9.5 billion. That’s more than 450% increase in the total number of people over the last 150 years.   Many of these people will be concentrated in mega-cities.

Middle schoolers from across the country, participating in National Engineers Week Foundation’s 2014-2015 Future City Competition, will act as engineering leaders to develop their own solutions to food metropolitan centers.   With billions more mouths to feed, there are increasing pressures on our global food supplies:  less farmable land, more water pollution, growing water scarcity, increased fuel costs (making importing and exporting foods more expensive), pesticide resistance, and the growth of megacities, to name just a few. In order to feed the world in the future, we will have to come up with smart new ways to grow our food much closer to where we live.  So what will these students envision for providing food to these megacities?

Future City purposely directs participants to incorporate real engineering challenges into their plans and this year is no different.   Besides the challenge to provide food to the populace  thousands of roads, bridges, and railways are in need of repair and increased traffic straining budgets, the effective use of basic transportation construction materials will become a pressing topic.     In recent years energy conservation is hot topic with past projects incorporating green technologies into the city design.

The 2014-2015 Future City Competition is expected to attract over 35,000 students from various middle schools in regions located across the country. The annual challenge has received national attention and acclaim for its role in encouraging middle schoolers nationwide to develop their interest in science, technology, engineering and math (STEM). Through hands on applications, Future City participants discover how engineering is both accessible and can make a difference in the world. Sixth, seventh and eighth graders are eligible to take part in the competition.

Students will begin by submitting a research essay describing their solutions for this year’s theme – Feeding Future Cities.  The full essay, resources, and background information will be officially released on July 15, 2014.

But there is more to the competition than just writing an essay.

Using SimCity 4 Deluxe Edition software or SimCity Software (www.simcity.com), participating students will work with an educator and volunteer mentor to design a virtual Future City model incorporating their ideas. Then they will build a physical model using recycled materials which can cost no more than $100 to build. In January the students at regional competitions (including Chicago) throughout the country will have their projects judged before teams of engineers and design professionals. The public is invited to witness the final’s portion of the judging process.

Regional chairman Don Wittmer notes, “It is exciting to see the interaction between the students and witness the enthusiasm that these students have in learning about engineering and the real life problems that are encounter everyday.  Our hope is that this competition helps students consider the possibility of studying engineering when they attend college.”   Bob Johnson a long-time volunteer to the program adds,  “The future of America rests NOT with those athletic superstars or entertainment celebrities garnering headlines and idolized by today’s youth but with those scientists, technologists and engineers charting the new information age.  The future of America is not found on the basketball courts, football grid irons or baseball diamonds nor it at the Movie Cineplex’s or at concert halls but in preparation of the next generation of scientists and engineers.

The National Engineers Week Foundation works year-round to sustain and grow a dynamic engineering profession critical to public health, safety, and welfare.  The Foundation supports engineering outreach, education, and celebration through a network of thousands of volunteers in its partner coalition of more than 100 professional societies, major corporations and government agencies. Together we meet a vital need: introducing students, parents, and educators to engineering, engaging them in hands-on engineering experiences, and making science and math relevant. The Foundation and coalition are actively putting the  ‘E’ in STEM.