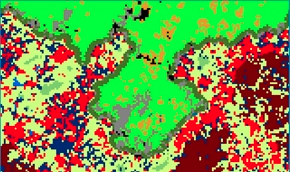 The Atlas of Urban Expansion, a critical online resource for data and images tracking global urbanization, will be updated and expanded in a new 2015 edition to reflect the scope of large and fast-growing metropolitan areas around the world.

At the World Urban Forum in Medellin this spring, leaders from the United Nations Human Settlements Programme (U.N. Habitat), the Lincoln Institute of Land Policy, and the NYU Stern Urbanization Project signed an agreement to support the research leading to the online publication on their respective websites of the Atlas of Urban Expansion: The 2015 Edition.

The signing ceremony included Eduardo Moreno, head of the Research and Capacity Building Section at U.N. Habitat, Gregory K. Ingram, the president of the Lincoln Institute, and Paul Romer, the director of the NYU Stern Urbanization Project and the Marron Institute. The work on the Atlas will be supervised by NYU’s Shlomo Angel, and will involve a team at the University of Connecticut, headed by Daniel Civco.

The mapping of global urbanization in the 21st century is of critical importance in what has been described as the urban century. Today over half the world’s population lives in cities; in the coming decades, two-thirds of the global population will be in cities – six billion people out of a projected total of nine billion. The growth will occur predominantly in sub-Saharan Africa and Asia. In many cases, the fast-growing cities of the developing world are inadequately prepared to accommodate this rapid growth. The UN estimates that approximately one billion people already live in informal settlements in substandard conditions, and that two-thirds of rural migrants moving into cities in sub-Saharan Africa are moving directly to informal settlements, or slums.

Keeping track of urban expansion is thus a critical component of informing policy and assisting cities in planning for the future. The Atlas of Urban Expansion 2015 Edition will contain maps and metrics describing the expansion of a new global sample of 200 cities, an increase from the 120 cities originally studied. The sample represents five percent of the universe of all cities in the world that had populations of 100,000 or more in the year 2010; it is a stratified sample, containing cities in eight world regions, in four population size classes, and in three categories of countries, based on the number of cities in the country.

As in the first edition, the new Atlas will be based on the classification and mapping of Landsat satellite imagery in combination with census-based population data for the administrative districts comprising the built-up areas of cities. It will contain maps and metrics for each of the 200 cities in the sample for the three time periods, 1990, 2000, and 2010. Metrics will include the extent of built-up areas for each city, the population of the city, the average density of its built-up area, the increase in the city area brought about by the inclusion of the open spaces in and around its built-up area, and the extent to which the city is compact-its footprint resembling a circle.

While the focus of the Atlas is on the quantitative aspect of urban expansion, future phases of a broader initiative, Monitoring Global Urban Expansion, will focus on quality, including such measures as walkability, arterial grids, open space, affordable housing, and the provision of basic services such as water and sewer.

Without evidence that the expansion areas are accessible to jobs or whether land and housing in expansion areas are affordable, which establishes a relationship between public preparation for urban expansion and the quality of the built environment, urban policymakers will continue to act without an empirical basis for their decisions. Future phases of the initiative involve the analysis of high-resolution satellite imagery of the expansion areas of all the cities in the sample, and engaging people on the ground in each of the cities in the sample. These phases are currently in a pilot stage, being tested in four cities: Addis Ababa and Mekele in Ethiopia and Bogotá and Valledupar in Colombia.

The Atlas of Urban Expansion accompanies the Policy Focus Report Making Room for a Planet of Cities, a comprehensive and original analysis of the quantitative dimensions of past, present, and future global urban land cover, culminating in a proposed new paradigm for preparing for explosive growth in cities the world over. Further detail of that analysis is available in three working papers available for downloading: The Persistent Decline in Urban Densities, The Fragmentation of Urban Footprints, and A Planet of Cities: Country Estimates and Projections of Urban Land Cover, 2000-2050. A forthcoming book, titled The Expansion of Cities, bringing together the analysis of the maps in the Atlas of Urban Expansion within a broader discussion of urban expansion in a global and historical perspective, will be published by the Lincoln Institute in 2012.