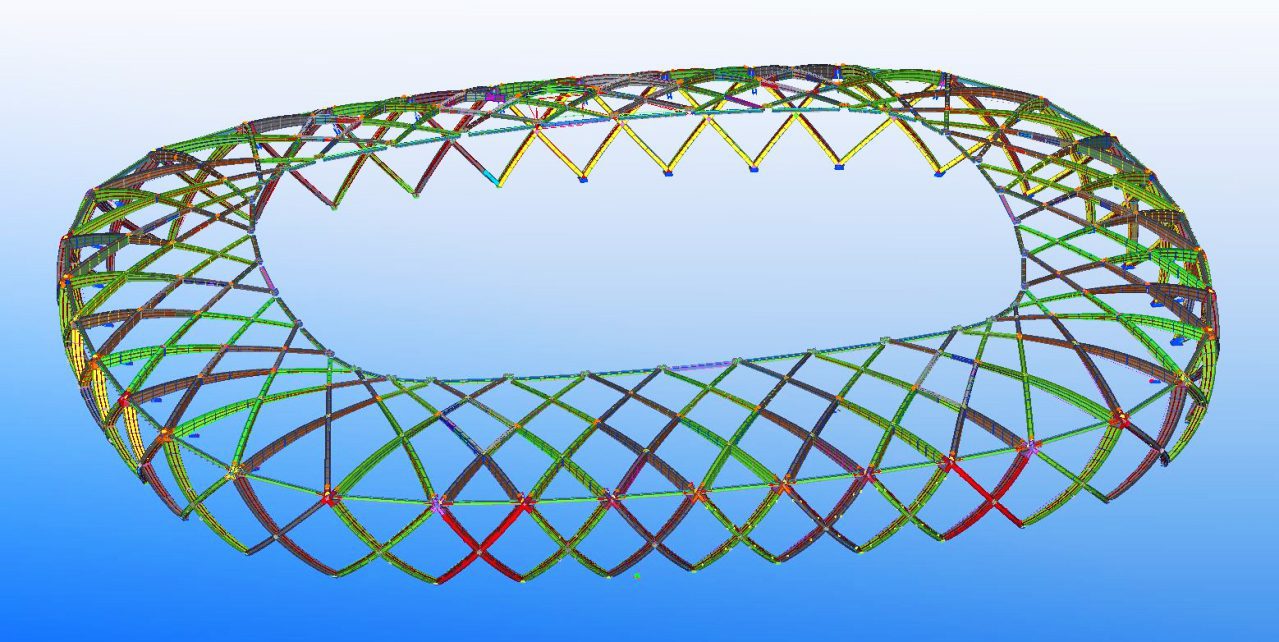 With clever use of Tekla’s BIM software, Martifer Construções improved productivity by 20% and efficiency by 30% while successfully meeting the tight construction deadlines of the Arena Amazônia in Manaus, Brazil, which is just one of the 10 world-class Brazilian football stadiums modeled with Tekla.

To build the innovative steel structures on time for the games, Martifer Construções chose Tekla software. Tekla offered Martifer what they needed and met the requirements for tracking materials and guaranteeing the implementation of the project within the tight deadline. This detail shows the complexity of the steel joints in the structure. Copyright © 2014 Tekla

A steel structure circles the stadium creating a 23,000 square meter roof. Built of 7,000 tons of steel, the main and secondary structures of angled and H profiles and steel plates rise to the height of 31 meters. The pitch is surrounded by the steel structure coated with translucent white PTFE membrane sheets, reducing the temperature in the stadium. At Martifer, 50 employees worked on design, modeling and construction management, and approximately 520 on the construction site of Arena Amazônia.

Fabricating the twisted and cambered beam that required exact coordinate control was a challenge. To manage pre-assembly and assembly, track materials during manufacturing and also for logistics, Martifer combined the possibilities of their own and Tekla software to ensure that planning and control advanced as they should.

“Our partners use Tekla solutions and we share information. Tekla was used in project coordination to clarify any questions and on-site to guide the assembly,” says Martifer´s Modeling Management Team.

Martifer has used Tekla for 14 years and they trusted the software to successfully follow through the various phases of manufacturing. They modeled the Arena Amazônia in 3D and extracted 2D drawings plus CNC and material listings, and created specific files to control geometric coordinates of the beams during manufacturing, pre-assembly and final assembly in stages – with dead, partial and final loads. Additionally, they first used Tekla to give shape to the structural beams and later for validating these.

As Martifer utilized Tekla’s multiuser functionality they could increase efficiency by 30%.

“We must highlight the 20% increase in productivity achieved using Tekla Structure´s Open API™ and the capability to customize reports and templates. We benefited greatly from all the time we saved and from the ease of adapting Tekla models to the constant changes in a project of this magnitude,” says Martifer´s Modeling Management Team.

Martifer began work in November 2012 and the Arena was inaugurated in March 2014. After the games it hosts concerts and other events.

Nine Other Stadiums Modeled with Tekla

Arena Amazônia is just one of the 10 world-class football stadiums in Brazil where Tekla was used for building information modeling (BIM).

The challenges in the project included the 200 meter long free-spanning structure and the tight schedule. Brafer used 4,500 tons of steel for the roof, which has 10 meters high and 4.5 meters wide trusses that span the entire width of the stadium. To overcome the challenges, Brafer relied on Tekla´s software, which allowed them to model and detail faster the steel structure and thus save time and consequently also money. In addition Brafer used Tekla BIMsight to share information and integrate the entire production and assembly process.