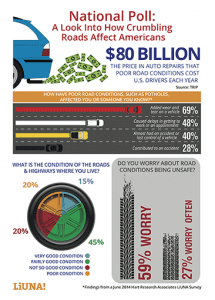 As the Highway Trust Fund nears collapse, a new national random-sample survey released today shows that a majority of Americans are worried about unsafe conditions on roads and highways. Nearly three in ten say poor road conditions have contributed to an accident and two-thirds say road conditions are wearing down their vehicles.

The poll was commissioned to Hart Research Associates by the Laborers’ International Union of North America. Interviews were conducted May 29 – June 1.

Key findings from the survey:

Poor road conditions affect people across all segments of society and across all political persuasions. Democrats and Republicans are both likely to say they have been affected.

“It’s time to stop sugar-coating this issue,” said LIUNA General President Terry O’Sullivan. “Americans have real concerns about safety due to the neglect of our roads and bridges. It is the solemn responsibility of Congress to pass a long-term, full-investment Highway Bill this year.”

Said former Gov. Ed Rendell, co-chair of Building America’s Future: “There is no doubt that it is past time for Congress to act on a long-term transportation and infrastructure plan. Investing in our infrastructure creates jobs and makes us more competitive in the global economy. Congress is hung up on the price tag of the investment the country needs, but they should really be worried about the cost of inaction. We can’t afford to wait any longer. Congress needs to take bold action and they need to do it now.”

Avery Ash, Director of Federal Relations for the American Automobile Association, also joined the poll release. “This survey – as well as AAA’s own polling showing that two-thirds of Americans believe the federal government should invest more than it does now on roads, bridges and mass transit systems – make it clear that motorists have serious concerns about road safety.”

In fact, according to the transportation research group, TRIP, poor road conditions such as potholes contribute to a third of all traffic fatalities – about 10,000 lost lives a year.

There are multiple proposals before Congress to fix the Highway Trust Fund and ensure a long-term reliable source of investment for roads and bridges in states across the country.

“I think it’s time our roads get a permanent fix,” said Indianapolis resident Raelene Carlton, who was among those surveyed and related problems with potholes that damaged her car. “There were three big potholes at the end of my street that were unavoidable. They broke my car’s tie rods! After failed attempts to get it fixed, I was about to make a trip to the gravel pit across the street to fill the hole myself.”

“Congress has no excuse not to act,” O’Sullivan said. “For LIUNA, passing a long-term, full-investment Highway Bill is about creating jobs – but it’s as much about making our roads and bridges safe. Like most working people, we rely on them every day.”

Details on survey results can be found at www.liuna.org/poll.

As part of its effort to advocate for transportation investment, LIUNA has launched radio ads, billboards and online action, which can be previewed at www.RepairOurRoads.org. In addition, LIUNA will kick off the “Getting Schooled in Infrastructure” school bus tour Monday in Wilmington, Delaware, where the heavily trafficked I-495 Bridge over the Christina River has been closed due to safety concerns. The tour includes a crushed school bus which will travel other parts of the country to highlight the need for a full-investment, long-term Highway Bill.

Comments are disabled
NEXT ARTICLE
The New Urban Pioneers are Transforming Chaotic Cities
June 18, 2014
PREVIOUS ARTICLE
Autodesk Hits the Road with InfraWorks 360, Sharing How it Accelerates Work through Visualization and Automation
June 18, 2014