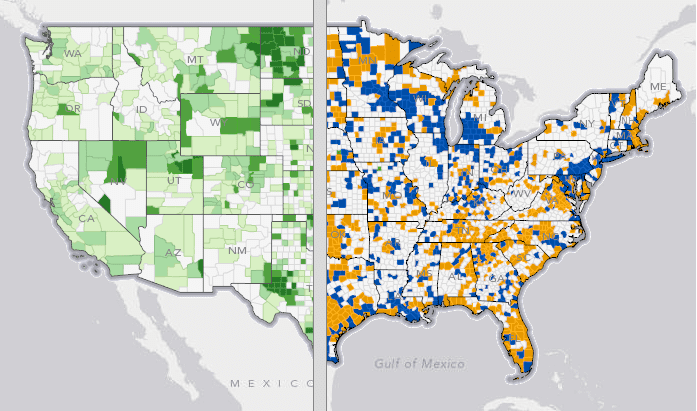 The United States Census Bureau has just published two new story maps that illustrate metro area and county population change. Built with Esri technology, these maps allow you to swipe between two different views of population data to better understand patterns and trends in the US.

Comparing Metro and Micro Area Population Change between 2002-2003 and 2012-2013
This app compares population growth by metropolitan area from 2002 to 2003 against population growth by metropolitan area from 2012 to 2013 to show how overall population patterns have shifted in the US over the past decade. While metro areas along the West Coast were growing at the fastest pace a decade ago, the fastest growing areas in the US today are primarily located in the Midwest, especially North and South Dakota. You can embed this map into your site with the following code:

County Population Growth Between 2012 and 2013 and the Primary Source of Population Change
Compare population changes by county from 2012 to 2013 against the primary source of population change by county to better understand the cause of population shifts in the US from 2012 to 2013. This app reveals that the dramatic growth in population in much of the Midwest is attributable to the purposeful migration of Americans, rather than a natural increase in population. You can embed this map into your site with the following code: