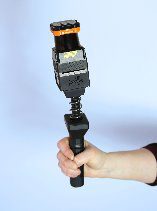 International consulting group COWI has added the world’s first truly mobile, hand held, rapid laser mapping system to its surveying equipment portfolio. COWI purchased the ZEB1 system, from 3D Laser Mapping, as it is easy to use, provides competitive advantages and is well supported.   With more than 6,000 employees worldwide COWI is a Danish company involved in more than 17,000 projects at any given point in time.  ZEB1 will be deployed both on shore and off shore for a wide range of infrastructure projects and building consultancy services.

“Where time is a limiting factor and speed of data capture is important ZEB1 is a powerful solution,” commented Morten Thoft, Surveyor and Senior Specialist in the Survey Department of COWI. “We see excellent opportunities for the ZEB1 providing building maps and floor plans for applications such as space management and due diligence. ZEB1 will also be useful when larger, more cumbersome devices are simply not practical such as in tunnels and other hard to reach areas.”

COWI A/S is an international consulting group, specialising in engineering, environmental science and economics, with headquarters based in Lyngby, Denmark. COWI’s Survey and Mapping Department provides a range of services including aerial mapping, airborne LiDAR and terrestrial laser scanning with specialists in Geographical Information System (GIS), Land Administration and Land Surveying. Having used traditional terrestrial laser scanners for more than ten years COWI has considerable experience in selecting and implementing best fit surveying solutions for a wide variety of projects around the globe.

“ZEB1 is very easy to operate and collecting 3D data at normal walking speeds gives us the ability to cover large areas in short periods of time,” continued Thoft. “Working with 3D Laser Mapping has also been a very positive experience. The service levels we have received have been very high, which is important to us, as when questions and challenges occur we need support and to share experience and know how.”

ZEB1 was developed by CSIRO, Australia’s national science agency, and is licenced to GeoSLAM (a UK based start-up company). The competitively priced ZEB1, now available from 3D Laser Mapping, allows for fast data capture without any complex set up. ZEB1 is easy to use, truly portable and does not require expensive software or high end computers to process the captured data.