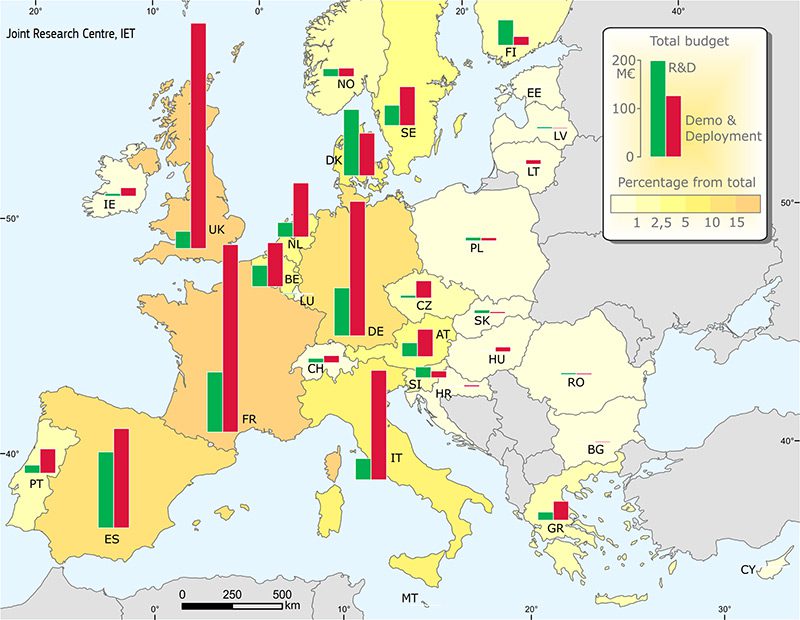 The JRC recently published its 2014 edition of the “Smart Grid projects outlook”, which presents the most comprehensive database of smart grid and smart metering initiatives up until the first quarter of 2014 across the European Union, Switzerland and Norway. The results can also now be visualised using new interactive, freely available web tools. In this update, more than 450 smart grid projects were identified, accounting for a total investment of €3.15 billion. Although the work from the preceding reports cannot be directly compared with this inventory a positive trend can be confirmed. The previous edition of this study reported 281 projects and a €1.8 billion budget.

With its 135 projects, Germany has the largest number of initiatives, while France and the United Kingdom have invested the most, at €500 million each. In both countries €5 million is on average pumped into a project. Denmark has the highest investment in smart grids per capita and per national electricity consumption followed by Slovenia, which together with the Czech Republic, is one of the leading countries within the newer Member States in establishing a strategy for smart grid testing and implementation. However, Eastern European countries only account for less than 1% of the total budget.

EU-15 organisations still manage the bulk of the investments in smart grid projects, of these, 90% are supported by some form of public funding. Private capital investment amounts to 49%; the rest comes from EC (22%), national (18%) and regulatory funding (9%), and the remaining 2% is unclassified. Several types of organisations, such as universities and distribution system operators – which together manage more than half of the budget –, transmission system operators, manufacturers and ICT companies participate to significant degrees in smart grid projects.
Around 200 million smart electricity meters in Europe (ca. 72% of EU customers) are expected to be deployed by 2020 with an estimated investment of €35 billion. In EU Member States where the roll-out of smart metering is positively assessed, the expected penetration rate for electricity may even exceed the EU target of 80% by 2020.

Together with this study, several interactive visualisation tools were launched, allowing the user to generate customisable maps, graphs and charts to track the progress on the European smart grid projects.

Comments are disabled
NEXT ARTICLE
Use of Aibot X6 for Powerline Inspection Wins German Prize for Innovation
May 28, 2014
PREVIOUS ARTICLE
Upcoming Global Water Education Conference Speaks to Sustaining Our Blue Planet
May 28, 2014