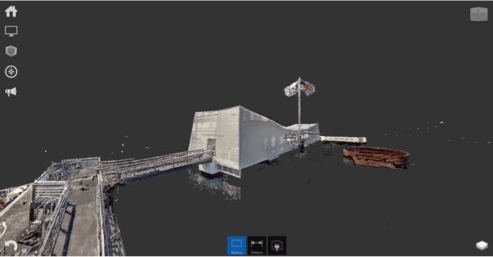 In honor of U.S. military veterans, the National Park Service (NPS) and Autodesk, Inc. (NASDAQ:ADSK) hosted a press conference on Memorial Day to unveil preliminary results from the first comprehensive survey of the USS Arizona and Memorial in 30 years and its resulting 3D models. A sonar scan of the USS Arizona shows the bow of the ship and three 14″ guns.

Consistent with Autodesk’s vision to help people imagine, design and create a better world, the survey takes full advantage of the latest technology for the purposes of both historic preservation and public education. Scheduled to be completed later this year, the survey will provide the public with a more detailed view and understanding of this historic site while contributing to the ship’s ongoing preservation.

At a Memorial Day press conference, a 3D printout of the USS Arizona showcased details never seen before on paper. In addition, highly detailed 3D models of a cooking pot and Coke bottle that have sat on the ship’s galley for the past 72 years were also created and displayed. Each model featured intricate details including color and the barnacles now present on the cooking pot. Autodesk and NPS hope to create a 3D model of the USS Arizona in its entirety by the end of this year.

“This technological approach helps make the USS Arizona’s legacy come alive that just wasn’t possible before,” said National Park Service Superintendent Paul DePrey. “The USS Arizona is one of America’s most revered historical sites. As its steward, the National Park Service has a mission to share the story of December 7 with current and future generations. Creating 3D models allows people to see and touch these highly detailed and accurate replicas, something that will play an important role in our educational outreach program.” A subsea laser scanner from 3D at Depth enables the team to capture details and texture of the USS Arizona.

Also present at the press conference was 92 year old USS Arizona survivor Don Stratton, one of only nine remaining USS Arizona survivors still alive, and one of only a few hundred to make it off the ship. Stratton was only 19 years old when Pearl Harbor was attacked. He along with six other crewmembers went hand over hand on a heaving line across the burning deck to safety on the USS Vestal that was moored alongside the USS Arizona that fateful morning. Stratton suffered burns over 70 percent of his body. A point cloud of the USS Arizona memorial displayed in Autodesk ReCap.

When presented with the 3D print of the cooking pot for the first time, Stratton said, “That is amazing. I don’t know anybody in the galley that survived that day. At the time of the explosion, it was self-preservation. After that, it was extremely hard to return. Now, when I go back and remember, it’s a little easier. I think it [3D artifacts] will make an impression on a lot of people, I really do.”

Stratton’s son Randy Stratton, who was also present, said, “You can’t duplicate these artifacts. They represent the beginning of the war, the end of the war and the fact that there is still life there [on the USS Arizona].” A view of Pearl Harbor, with the top of the USS Arizona in the foreground, and the green light of the underwater laser scanner glowing in the water.

Approximately 900 remains of the 1,777 officers, sailors and Marines killed still remain inside the USS Arizona; therefore any work done on the ship must be done with extreme care and sensitivity. With this in mind, the NPS is leading the effort to create a highly accurate, 3D digital representation, while minimizing any disturbance to the ship.

NPS is employing Autodesk’s reality computing technology, underwater photogrammetry, subsea LiDAR, high resolution SONAR, and above water laser scanning to conduct investigation and analysis without disturbing the ship. “The USS Arizona Memorial is such an important yet fragile piece of history,” said Brian Mathews, vice president, Autodesk. “Reality Computing is an emerging concept that bridges the physical and digital worlds, and Autodesk sees great potential in supporting the National Park Service and preservationists around the world with reality computing technology to capture, analyze and communicate these stories of our past for future generations.”

About World War II Valor in the Pacific National Monument

One of nearly 400 units in the National Park Service, World War II Valor in the Pacific National Monument preserves and interprets the stories of the Pacific War, including the events at Pearl Harbor, the internment of Japanese Americans, the battles in the Aleutians, and the occupation of Japan. This year, over 1.7 million individuals will visit the Pearl Harbor Visitor Center, making it the most popular visitor destination in Hawaii. Learn more at www.nps.gov/valr.