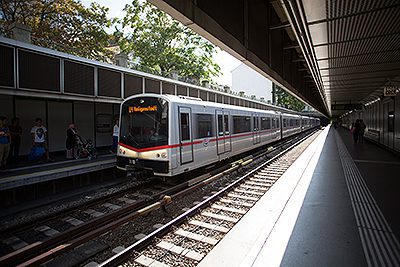 Siemens has received orders from Wiener Linien to supply state-of-the-art signaling technology for the Austrian capital’s U4 metro line in the course of the next few years. The scope of supply includes Trackguard Sicas ECC type electronic interlockings as well as the integration of the LZB513 automatic train control system. The 17-kilometer-long U4 line serves 20 metro station and links Hütteldorf in the west of the city with Heiligenstadt in the north. The orders are worth a total of over 40 million euros. Commissioning is scheduled to take place in stages from 2016 up to the end of 2019.

Unlike on other metro lines in Vienna, trains running on the U4 cannot be diverted onto a second track to avoid broken down vehicles as the route currently lacks crossovers as well as the technical means necessary to permit such movements. Rescue operations or defective trains can therefore quickly block an entire section of this line. In 2013 the City of Vienna passed NEU4, a comprehensive package of measures aimed at improving service on and increasing the reliability of the U4, or Green Line as it is called. In addition to a fundamental renewal of the entire infrastructure, the modernization will also include the construction of crossovers and the installation of new electronic interlockings.

Line 4 will be equipped with Trainguard type LZB513 automatic train control system made by Siemens. It enables train headways to be optimized in line with passenger volumes and maximizes the operating safety, reliability and availability of the metro. An integrated Automatic Train Operation (ATO) system drives the train automatically and ensures energy efficiency. The order also calls for the replacement of five SpDrS- 60U interlockings, including the two depots at Wasserleitungswiese and Hütteldorf, by Sicas ECC electronic interlockings.