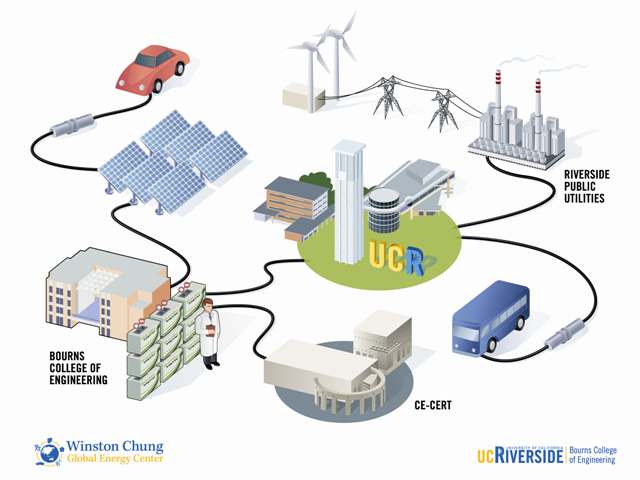 The purpose of the initiative is to research the integration of: intermittent renewable energy, such as photovoltaic solar panels; energy storage, such as batteries; and all types of electric and hybrid electric vehicles. It is the largest renewable energy project of its kind in California.

“This project puts UC Riverside at the forefront of smart grid and electric vehicle research, providing a unique platform for engineers and utilities to identify and solve potential problems at scale,” said Matthew Barth, lead investigator of the initiative and the director of UC Riverside’s Bourns College of Engineering Center for Environmental Research and Technology (CE-CERT).

Those attending the event will be able to view an electric trolley, electric cars and an autonomous vehicle. They will also be able to tour labs and see demonstrations that focus on solar energy, batteries and energy efficiency technologies.

The first two years of operation is supported by a $2 million contract from the South Coast Air Quality Management District. Construction of the initial testbed platform is also supported by an additional $10 million in contributions from UC Riverside and private partners.

The testbed, which is located at CE-CERT, includes:

On average California derives two-thirds of its electricity from fossil fuels such as coal and natural gas, and the majority of vehicles in the state are powered by imported oil. Introducing renewable electricity generation and electric vehicle technologies such as plug-in hybrids are two key priorities in California’s strategy to move toward domestic energy diversity and to meet air quality and greenhouse gas goals.

To meet these priorities utility providers need to ensure that bringing a significant number of fast charging electric vehicles onto the existing grid system will not impact the local electricity demand and reliability. A key component of the UC Riverside project is to demonstrate that electric vehicles can be seamlessly introduced into the existing grid system through “smart integration” of renewable energy, storage and advanced dispatch controls.

A research consortium is being developed to build upon these and other research goals as new technologies and challenges develop. The consortium will include technology companies, utility companies, energy agencies, investors and venture capital firms.

Comments are disabled
NEXT ARTICLE
The OGC Seeks Comments on Charter for PipelineML Working Group
May 18, 2014
PREVIOUS ARTICLE
Urbanisation Aids Transition to Green Economy
May 18, 2014