Secretary of the Interior Sally Jewell today unveiled the National Climate Change Viewer, a climate-visualization website tool from the Interior Department’s U.S. Geological Survey. The new tool gives citizens and resource managers the opportunity to look at climate-driven impacts on watersheds and map projected changes at the local, regional, state and watershed levels.

Jewell’s announcement follows on the heels of the release of the Third National Climate Assessment, the most comprehensive scientific assessment ever generated of climate change and its impacts across every region of America and major sectors of the U.S. economy. The assessment found that multiple stresses on water supplies are becoming serious challenges in many regions, with the impacts cascading across sectors including agriculture and energy.

“The new USGS National Climate Change Viewer shows projected climate-driven challenges to watersheds and future water supplies across the United States,” said Secretary Jewell. “This information will be valuable to the work of scientists, water and land managers, farmers and ranchers — as well as all interested citizens. As we carry out the President’s Climate Action Plan, this will be a useful tool for planning how to manage, adapt to and mitigate climate change.”

The U.S. Geological Survey developed the National Climate Change Viewer in collaboration with the College of Earth, Oceanic and Atmospheric Sciences at Oregon State University.

The National Climate Change Viewer finds that across the United States to the year 2100, consistent with other research and observations, projected warming will continue to cause a loss of snowpack, particularly in the Northeast and mountainous West. As a result, in many locations the seasonal timing of peak runoff will occur earlier in the spring –for example, March or April instead of May or June. Runoff will be reduced during the summer, even though the total amount of annual runoff will remain similar to current levels.

This is the second phase of the National Climate Change Viewer project, which aims to make climate model results more accessible and understandable. In the first phase, the climate change viewer provided information on projected temperature and precipitation for the United States, states and counties through the 21st century in 25-year periods as part of an effort to visualize some climate model simulations being used by the IPCC (Intergovernmental Panel on Climate Change) Fifth Assessment Report.

In this second phase, the climate change viewer has been expanded to provide information on associated projected changes in snowpack, soil moisture, runoff and evaporative deficit for U.S. states and counties and for USGS Hydrologic Units or watersheds as simulated by a simple water-balance model. The model provides a way to simulate the response of the water balance to changes in temperature and precipitation in the climate models. Combining the climate data with the water balance data provides further insights into the potential for climate-driven change in water resources.

The National Climate Change Viewer and data are already being used by federal agencies, including the USGS and the National Park Service, to examine the potential effects of climate change on aquatic and terrestrial ecosystems in the Greater Yellowstone Area and elsewhere.

USGS scientists Steve Hostetler and Jay Alder, who developed the tool, said they believe that the water balance modeling will provide a broader perspective on climate change. “For example,” said Alder, “in addition to temperature and precipitation, farmers and land and water managers can use the website to help guide their thinking and actions concerning adaptation and mitigation strategies, and educators can use it to teach students about some of the implications of climate change.”

As a demonstration of how the National Climate Change Viewer can be used to view climate change information for a specific location, the example shown here illustrates the potential for changing water resources in the Upper Klamath Lake, Ore., basin.

The map on the left indicates the change (relative to 1950-2005) in the average annual snow water equivalent (the liquid water stored in the snowpack) over the California Region for the period 2050-2074 using the unchecked greenhouse gas emissions scenario (RCP8.5). The map on the right indicates that, relative to present, the average loss of snow water equivalent over the Upper Klamath Lake area (bold outline) is 2.8 inches, which is 58 percent less. The reduction is primarily a result of warming at high elevations. Over Upper Klamath Lake, the annual average maximum and minimum air temperatures warm by 5.9 °F (3.3 °C) and 3.1 °F (1.7 °C), respectively, in 2050-2074.

In the same period, 2050-2074, water stored in snowpack is reduced by 58 percent a year over the Upper Klamath Lake Basin (upper left graph). Peak runoff shifts from June to March, and summer runoff is reduced (upper right graph), even though the total annual runoff remains essentially unchanged. Soil moisture is reduced in the summer (lower left graph), and there is an increased deficit of water for evapotranspiration (lower right graph). Thus, for this projection, maintaining, for example, irrigated agriculture at present day levels would require additional water to make up the loss of soil moisture and increased evaporative demand even as summer runoff is reduced. 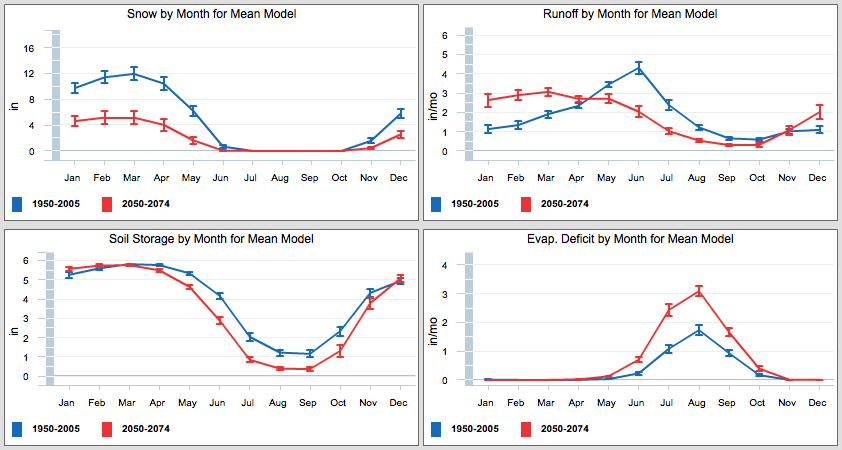 Comments are disabled
NEXT ARTICLE
OpenTreeMap Launches in Canada, Adds Stewardship Activities and Green Infrastructure Tracking
May 9, 2014
PREVIOUS ARTICLE
Beyond Shovel-Ready: The Extent and Impact of U.S. Infrastructure Jobs
May 9, 2014