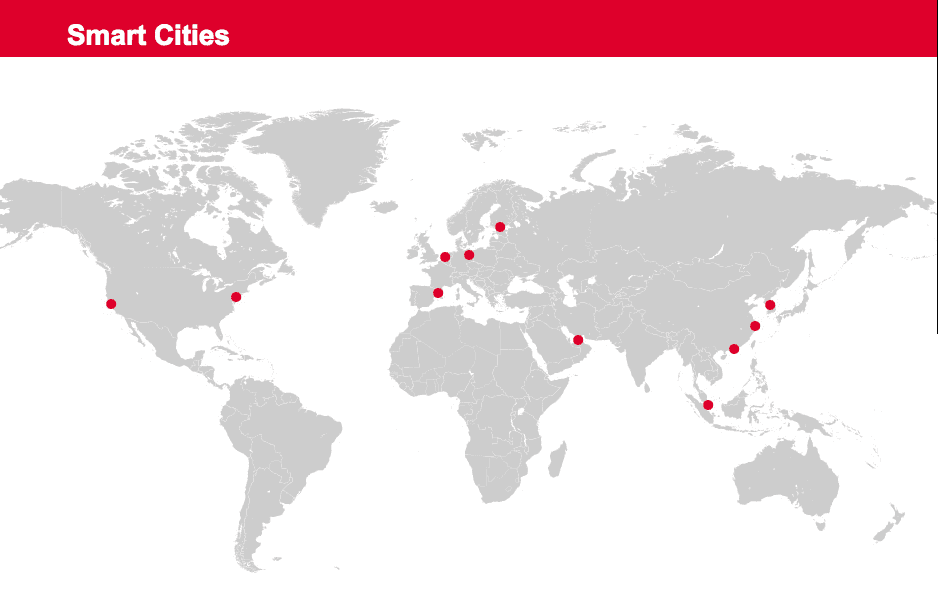 A global initiative to encourage the world’s leading cities to become ‘smart’ has received a significant boost from information specialists at the University of Sheffield, who have helped develop the first global smart city ranking.

Mobile-connected smart cities is a concept being led by GSMA, the association of mobile operators and related companies, to help major urban centres around the world utilise information and communication technologies to improve the lives and well-being of their citizens.

It’s their vision that ‘smart cities’ will use advances in communication technologies including mobile networks to provide citizens with better access to information about city services, move around easily, and improve the efficiency of city operations.

By taking advantage of existing ICT infrastructures, and utilising the innovations that are currently taking place in the sector, the smart cities initiative also presents the opportunity for major urban centres to enhance security, fuel economic activity and increase their resilience to natural disasters.

Dr G.C. Alex Peng from the University of Sheffield’s Information School, said: “A future smart city will contain a series of highly innovative and intelligent technologies that will affect every single aspect of our lives, ranging from home facilities, to transportation, to education, to healthcare, to energy and many more.”

At the moment the concept of a smart city is increasingly topical across the globe with no clear benchmarks or common agreement of what a smart city is and how it can be measured. In light of this, Dr Peng and his interdisciplinary research team (involving also Professor Tim O’Farrell and Dr Mariam Kiran) from the University of Sheffield, are working with GSMA to help them develop a common index for measuring smart cities, the first global smart city ranking available.

Dr Peng added: “The GSMA initially developed a common set of 31 indicators for measuring economics, infrastructure and social benefits of mobile connected smart cities. In Sheffield, we’ve been helping the GSMA to enhance their Smart Cities Index by collecting opinions from global experts in these fields to determine the weights of the 31 indicators.

“In addition, we produced a calculation model to normalise and aggregate the datasets associated with the 31 indicators in order to produce an overall Smart Cities Index.”

Some further data research work still needs to be done in order to produce the final Smart Cities Index, however Dr Peng and his team have already identified some important conclusions on how ‘smart’ some of the world’s leading cities are becoming.

“All of the 11 smart cities involved in the analysis have their own strengths, for example Barcelona is doing particularly well in deploying NFC Point-of-sale devices and smart video surveillance; Shanghai is very strong in smart surveillance and city-sponsored mobile apps; Dubai has a well-balanced development in different smart city aspects including city-sponsored mobile-app, mobile broadband, and smart meters deployed in households.”

The Sheffield team’s analysis shows that although no city can be classed as being truly ‘smart’ at the moment, some promising developments have been achieved at this early stage and many new projects have been initiated in different cities.

“We expect that the global rankings and performance of smart cities will change rapidly over the next few years. For large cities with high populations and large geographical sizes, it requires more investment in infrastructure and related ICT facilities to make the city smart, whereas smartness may be more easily achieved in smaller cities,” added Dr Peng.

A recent report by the Department of Business, Innovation and Skills published in October 2013 values the smart cities industry at more than $400 billion globally by 2020, with the UK expected to receive a 10 per cent share.

Dr Peng said: “Overall, it will be interesting to investigate the current smartness of cities by creating the index, while also exploring the potential business opportunity and market size of smart cities. A city with high smartness may not necessarily have high market potential, and vice-versa. Our next piece of work here in Sheffield is to work with the GSMA to measure and estimate the market size of 11 smart cites across the world.”

Comments are disabled
NEXT ARTICLE
Esri and the United Nations Partner to Improve Global Climate Resilience
May 5, 2014
PREVIOUS ARTICLE
MTS Enhances Safety in Energy Markets by Introducing a New Line of Sensors
May 5, 2014