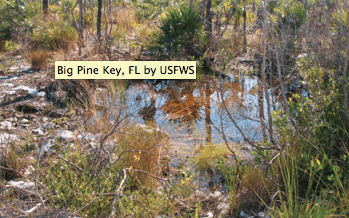 To coincide with American Wetlands Month, which begins May 1, the U.S. Fish and Wildlife Service is announcing the completion of the most comprehensive and detailed U.S. wetland data set ever produced, capping a 35-year effort by the Service to map the extent of the nation’s wetlands.

The Wetlands Inventory Mapper (http://www.fws.gov/wetlands/Data/Mapper.html) has digitally mapped and made publically available wetlands in the lower 48 states, Hawaii and dependent territories, as well as 35 % of Alaska. It is an invaluable aid to landowners, developers, government planners and permitting authorities, conservation organizations and academic institutions in their collective efforts to ensure wetland conservation and inform economic development.

“The completion of this wetland dataset marks a significant milestone in national efforts to conserve wetlands in the United States,” said Gary Frazer, the Service’s Assistant Director for Ecological Services. “Wetlands are critical ecosystems that support an astounding diversity of plant and animal life, and provide essential ecological services; yet wetlands are disappearing at an alarming rate. This online mapper is a key tool in the ever-more challenging quest to maintain the health of our wetland habitats and the biodiversity they sustain.”

Wetlands provide habitat for thousands of species of fish, wildlife and plants, and act as nurseries for many saltwater and freshwater fishes and shellfish of commercial significance. They also provide important ecological services such as flood control, water filtration and the supply of groundwater, and they provide recreational and wildlife viewing opportunities for millions of people.

Wetlands are facing numerous, ongoing challenges, such as agriculture, development and resource extraction, as well as sea level rise, increasing storm severity and drought due to climate change.

Between 2004 and 2009, the reported average annual rate of wetland loss in the coastal watersheds was 80,160 acres. This demonstrates that the target of “no net loss” of wetlands in coastal areas is not yet being achieved.

To access the wetlands data and mapping tool, and learn more about the National Wetlands Inventory, visit: http://www.fws.gov/wetlands/Data/index.html.