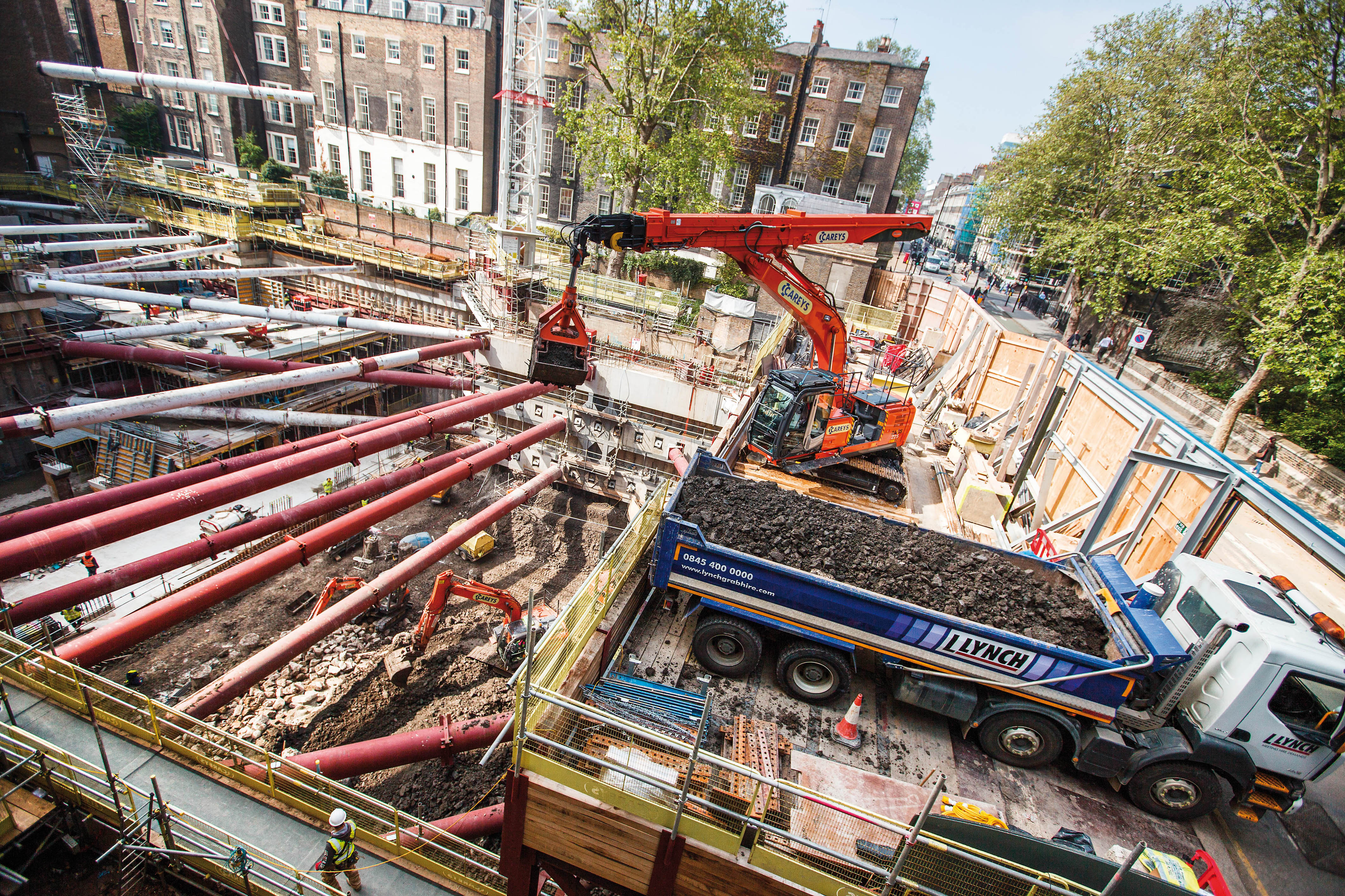 Matt Ball on May 1, 2014 - in Analysis, Construction, Feature, Featured

Dealing with the infrastructure that can’t be seen, and that in some cities has been in the ground for 100 or more years, is a serious challenge that directly impacts project budgets. Users want a solution to accomplish good space management and good workflows and processes to deal with underground utilities. Bentley sees this as primarily an information problem where their users need to consolidate and review existing data, capture new data, and represent that data in order to put together a utility conflict matrix that then plays into the project approach and timeline. This underground complexity is typical of old urban cores, such as this image of an excavation project in central London. Image courtesy of Hitachi.

Bentley has been working on the subsurface modeling problem for some time, with the needs of engineers in mind for site specific details of land and profile, as well as their space management needs to deal with project site encroachments or other impediments to construction.

Bentley Systems’ new Subsurface Utility Engineering (SUE) application is built on OpenRoads technology, which underpins their InRoads, GEOPAK, MXROAD and PowerCivil for “Country” (with 20 versions that incorporate standards and languages for different regions). OpenRoads provides means to capture intelligence in the model by establishing rules and attributes that are captured and remembered by the system.  Given that all of this data underpins analytical models for such things as wastewater, water and storm needs, years of work have gone into frameworks for data import that are very robust and focused on data capture in order to create an intelligent cohesive model.

These users are gathering information such as where are the pipes or conduit, who owns it, who made or installed it, what are its attributes such as size and material, and who governs it. One of the major challenges that Bentley has addressed is the ability to simplify the integration of this information with a federated approach that can create 3D models from survey information, CAD artifacts, GIS, Excel spreadsheets, Oracle databases or any other industry standard source of information. Quality Level in Bentley Subsurface Utility Engineering (SUE) quantifies the level of risk associated with the 3D utility model component’s location in the buried construction zone. The above screen capture shows one design file with two simultaneous model views of the same composite subsurface utility model. One is a schematic plan and the other 3D. The software allows for simultaneous separate queries on both.

Digging into old plans, field surveys, and other sources comes with a degree of risk, because you don’t really know how accurate the information is, and you want to also preserve the essential quality of the data to know how far you can trust it.

This is where the Standard Guideline for the Collection and Depiction of Existing Subsurface Utility Data (38-02) comes in, as it assists in classifying the data and reducing risks by grading the reliability of the information.

The quality levels are:

Project risks and project workflows dictate the quality level that is right for each project, or if it’s linear infrastructure, what quality is needed for what location, depending on the degree of complexity at certain junctures weighed against the quality of the data you have at hand.

“Every bit of information can be assigned an attribute, and the quality level can be color coded and viewed,” said Cook. “The key is to have visibility on risk to know that when you run into complexity you can satisfy any paranoia, particularly for such things as the presence of a high-pressure gas line.”

A key capability of SUE is an automated clash detection feature that runs against the model to substantiate objects and compares extents. In order to achieve simulation of the model, you have to have good data to put through the rules-based engines as the rules are the fabric that hold these things together.

The rules-based approach is also known as parametric design, and this is achieved through good data, templates, and standards. For instance, each highway agency has a book of standards regarding their construction details that can be rendered in high detail in 3D by simply attributing drawing elements with features, details, and even behaviors from the standards book.

“As you get into large systems and a cloud environment, we can leverage the rules engines to the hilt,” said Cook. “It’s best to think in terms of models as repositories for the engines that run against them. The core use case is a public utility network that is buried with activities planned, and one or more utilities that have potential conflicts. It is first modeled, and then the engine filters through it and a conflict report provides the start for a utility engineer to work toward resolution.”

Bentley uses their i-model data format to share these intelligent model, and to put the models into motion against rules or schema.

“The promise of Civil intersecting with GIS is that we finally get civil engineers to think in terms of schema,” said Cook. “I’m looking forward to the day when optioneering is a first-class concept, where with Level 2 BIM we can conduct gap analysis and indexing to weigh alternatives against each other, and verify performance. It’s going to happen as an epiphany, a wow moment.”

SUE is the first commercial taste of Bentley’s effort to share a 3D modeling engine, high-volume data capacity, and the Extract/Transform/Load capacity across products to integrate different data sources into an intelligent 3D view. The target for the product intersected with a Transportation Research Board project under their SHRP-2 program to deliver3D intelligent model. Bentley joined that project that was led by the Gas Technology Institute (to advance a reference prototype that States could use for right-of-way stewardship of the buried utilities found within their rights-of-way. SUE stood up well against TRB’s use cases, with proven 3D workflows that have structured pathways back to the spatial repository. Now, this application is available to Bentley’s users to take underground modeling to the next level.

Comments are disabled
NEXT ARTICLE
U.S. Fish and Wildlife Service Announces Completion of National Wetlands Database and Interactive Mapping Tool
May 1, 2014
PREVIOUS ARTICLE
The Looming Fiscal Disaster for Transportation
May 1, 2014