The U.S. Army Environmental Command provides geospatial services for a variety of operations and organizations throughout the Army. Among those are the geospatial analyses and customized mapping support that USAEC contributes to the Energy Initiatives Task Force’s effort to meet its goal of 25 percent of all energy consumed on Army installations to be from renewable energy sources by 2025. 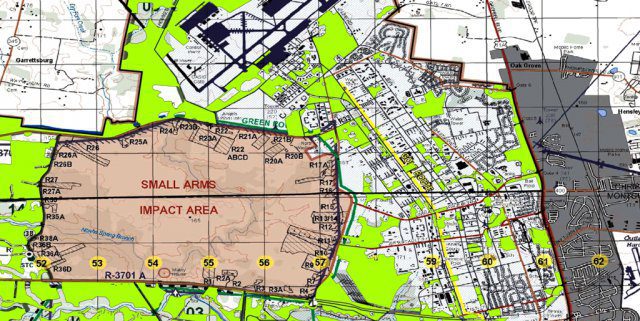 The Office of the Assistant Secretary of the Army for Installations, Energy and Environment requested USAEC geospatial services to support EITF in identifying Army lands that may be available for the renewable energy projects. USAEC developed a “clear parcels” methodology that analyzed installation geospatial data nationwide.

The goal of the analysis was to identify areas on installations that were both suitable for renewable energy projects and that were not excluded due to a variety of mission-related factors. The factors chosen were partially determined by the availability of geospatial data for installations that is maintained in Army Mapper, the Army’s official geospatial database of record, and the relevance of the factor in eliminating sites from consideration.

At the end of the first stage of the analysis, all excluded areas were merged together into a single layer and overlaid on aerial imagery for quality control. Visible areas of structures, roads, and surface water not already removed from consideration were manually edited to eliminate them from the study. In some instances, especially those where little geospatial data was available from the installation, a map from the Sustainable Range Program was georeferenced and used to determine training exclusion areas on the installation.

Topography plays an important role in determining suitability for construction projects; thus, the second stage of the analysis involved a collection of 10 meter digital elevation models obtained from the U.S. Geological Survey to determine the percentage of slope, or change in elevation over a specified distance, and eliminating those areas greater than 20 percent slope from consideration.

The final output from the “clear parcels” analysis was used in custom maps created for EITF personnel to develop a general understanding of the areas potentially available for renewable energy projects. The accuracy of the final output was strongly influenced by the amount and quality of data available in Army Mapper. After the geospatial analysis was conducted, each collection of clear parcels was assigned a qualitative uncertainty level based on the installation’s data layers that were available in Army Mapper.

Regardless of the uncertainty, the analyses proved useful in providing a starting point for discussions between EITF personnel and installation subject matter experts. Those discussions were further enhanced by continued mapping support from USAEC when additional or updated data were provided by installation staff.

This large scale geospatial analysis may be the first of its kind to illustrate the utility of Army Mapper in linking Army installations with headquarters requirements for more detailed site analyses. The same kind of large scale analysis can be used in the future for similar projects, reducing costs and saving time while providing reasonably accurate and timely information to decision makers.