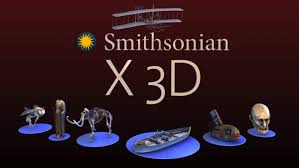 The 3D Digitization Program Office of the Smithsonian, Vincent Rossi and Adam Metallo, presented at the 2014 SPAR International Conference in Colorado Springs today. This team is responsible for scanning and archiving the collections of the 19 museums of the Smithsonian. That’s a lot of content to archive and present the nation’s collection to the public, and the team is pioneering 3D with just three members that need to head back quickly to Washington in order to receive and scan a new Tyrannosaurus Rex that is being delivered this week.

Some of the projects highlighted include:

The Smithsonian has teamed with Autodesk to develop a 3D viewer to present the scans to the public. The Smithsonian X 3D viewer allows for manipulation of objects. They use a 2.5D viewer in order to be able to stream the detailed models online. The 3D Explorer includes video and storytelling details as well as an embed capability to import models directly online. The Smithsonian X 3D project has been embraced by traditional media, with a lot of interest including Mythbusters and more than 9 million Twitter followers for the event that even beat out the baby Panda camera.

The Smithsonian aspires to quickly document the archives of the museum in 3D, with Picturae DigiStreet as a 2D example as they can scan thousands of objects in a conveyor belt machine. They hope to reach the same volume with 3D, with a need to bring down costs dramatically to reach their objectives and increase the amount of data that is archived. Digitzation and access can make a huge impact for the country’s archives, taking down the wall and solving the access problem, making the archives accessible.