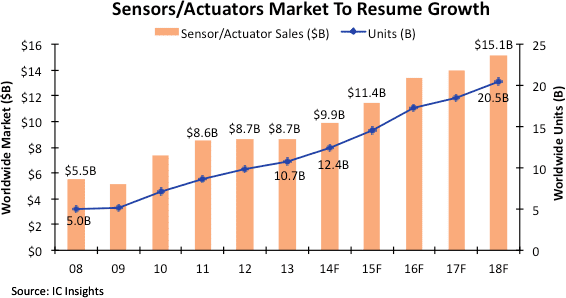 For 10 years, sensors and actuators have been the semiconductor industry’s fastest growing market segment, driven by higher levels of embedded control, new wireless sensing applications, and intelligent portable systems—such as smartphones—that can respond to changes in their environment and locations.  However, in 2013, this normally vibrant category lost momentum and showed nearly no sales increase in the year, according to IC Insights’ new 2014 O-S-D Report—A Market Analysis and Forecast for Optoelectronics, Sensors/Actuators, and Discretes. The sensors/actuators market was flattened last year by slow unit growth and price erosion in its two largest sensor product categories—accelerometers/gyroscopes and magnetic-field sensors—as well as ongoing weakness in actuators, based on the analysis in the new 2014 O-S-D Report. The slowdown in sensors and actuators had been brewing for a couple years with sales in this market plateauing in the 2011-2013 timeframe after surging to record-high levels from the 2009 downturn.  Inventory corrections in some cellphone segments, falling average selling prices (ASPs), and delays of purchases by cautious system makers caused the sensors/actuators business to stall out in 2013 with total revenues increasing just 0.3% to slightly more than $8.7 billion, but a new wave of stronger growth is expected to begin in 2014 as the global economy improves and new systems applications rejuvenate sales (Figure 1).

Worldwide sales of sensors and actuators are forecast to grow 14% to a new all-time high of $9.9 billion in 2014, followed by a 16% increase in 2015 to $11.4 billion, according to the new 350-page report, which also contains extensive coverage of optoelectronics and discrete semiconductors.  Between 2013 and 2018, the sensors/actuators market is projected to rise by a compound annual growth rate (CAGR) of 11.7% to reach $15.1 billion in the final forecast year of the 2014 O-S-D Report.  Among the market growth drivers identified in the report are new multi-sensor smartphone platforms, wearable systems (such as smart watches, wireless medical devices, and personal activity trackers), “Internet of Things” applications, radio-frequency filtering actuators, pocket-sized projectors built with micro-mirror devices, laboratory-on-chip testing tools for drug, disease, and DNA analysis, microphone chips, fingerprint-identification sensors, and more automotive sensors for higher levels of safety and automation of driving.

In 2013, total sensor revenues grew by a below-average rate of 3% to reach a new record-high $5.4 billion compared to about $5.3 billion in 2012.  Since 2003, semiconductor sensor sales have increased by a CAGR of 13% but growth rates have slowed in recent years.  In 2013, revenues grew in two of the four of the sensor product categories, according to the new O-S-D Report.  Pressure sensor sales strengthened significantly in 2013, climbing 16% to a new all-time high of $1.3 billion due to new measurement applications in smartphones and other portable systems, medical equipment, embedded-control applications, and healthy growth rates in automotive markets. However, acceleration/yaw sensor sales (for accelerometers and gyroscope devices) declined 2% to slightly less than $2.5 billion in 2013, while revenues for magnetic-field sensors (including electronic compass chips) fell 1% to $1.4 billion in the year.  Built with MEMS technology, acceleration/yaw sensors—the largest sensor category in terms of dollar volume—had not suffered a sales decline since 2005.  Magnetic-field sensors—the largest unit-volume sensor category and second in dollar sales—had grown by double-digit annual percentages between 2010 and 2012 after declining 22% in the 2009 downturn.   Meanwhile, the large-but-eclectic actuator product category declined 4% in 2013 to about $3.3 billion after dropping 10% in 2012.

The new O-S-D Report’s forecast shows all product categories in the sensors/actuators market strengthening with double-digit sales increases in 2014.  New record-high sales are expected to be set in pressure sensor (+18% to $1.6 billion), acceleration/yaw sensors (+14% to nearly $2.9 billion), and magnetic-field sensors (+13% to $1.6 billion). The actuator category is projected to end its two-year sales slump in 2014, rising 11% to about $3.6 billion, according to the new O-S-D Report’s forecast.

In a one-of-a-kind study, IC Insights expands its coverage of the semiconductor industry with detailed analysis of trends and growth rates in the optoelectronics, sensors/actuators, and discretes market segments in its newly revised 350-page O-S-D Report—A Market Analysis and Forecast for the Optoelectronics, Sensors/Actuators, and Discretes.

Now in its ninth annual edition, the 2014 O-S-D Report contains a detailed forecast of sales, unit shipments, and selling prices for more than 30 individual product types and categories through 2018. Also included is a review of technology trends for each of the segments.  The 2014 O-S-D Report, with more than 230 charts and figures, is attractively priced at $3,190 for an individual-user license and $6,290 for a multi-user corporate license.