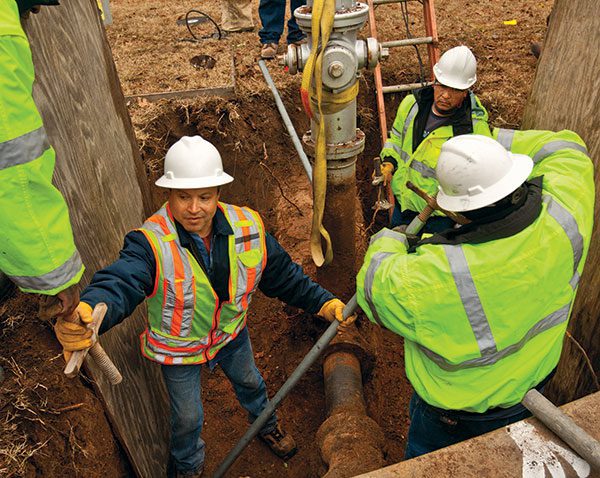 The state of water and wastewater infrastructure is the top current issue facing water professionals and those they serve, according to the American Water Works Association’s 2014 State of the Water Industry Report, with long-term water supply second on the list.

The AWWA State of the Water Industry Report captures the most pressing water issues as expressed by more than 1,700 North American water experts. It is available free of charge from AWWA’s website.

The well-documented need to address aging drinking water and wastewater infrastructure has been a top area concern since the first State of the Water Industry Report in 2004. A 2012 AWWA study found that more than $1 trillion will be needed to replace and expand drinking water infrastructure alone over the next 25 years, and wastewater costs are thought to be similar. With such a figure looming, it’s not surprising that financing capital projects was cited as the third most critical issue.

“The millions of miles of water and wastewater pipes running below our streets are essential today and for future generations,” said AWWA Executive Director David LaFrance. “They protect public health and the environment, provide fire protection, sustain our businesses and provide the everyday quality of life we enjoy. The 2014 State of the Water Industry Report makes clear that to help citizens and businesses we need workable finance solutions to manage these mounting costs in the years ahead.”

Last week, more than 130 water professionals met with members of the U.S. Congress in Washington, D.C. to advocate for funding of existing water finance tools and the creation of a new mechanism called a Water Infrastructure Finance and Innovation Authority. A WIFIA program is being considered as part of the Water Resources Act currently in a conference committee.

With drought conditions persisting in California, Texas and elsewhere, the survey respondents rated several issues related to water resources as highly important. Long-term water supply availability was the second most important issue, groundwater management and overuse was sixth, watershed protection was seventh and drought or periodic water shortages was eighth. Sixty-four percent of respondents indicated long-term water supply was critically important and less than one percent rated it as unimportant.

Respondents also expressed concern about the public’s understanding of the value of water resources and water systems — the fourth and fifth issues respectively.  AWWA is working alongside 11 other associations and private companies on the Value of Water Coalition, which seeks to raise awareness about the value of water and the importance of water and wastewater infrastructure.

Established in 1881, the American Water Works Association is the largest nonprofit, scientific and educational association dedicated to managing and treating water, the world’s most important resource. With approximately 50,000 members, AWWA provides solutions to improve public health, protect the environment, strengthen the economy and enhance our quality of life.