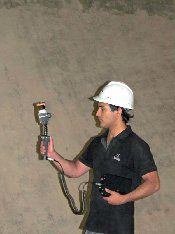 ZEB1 the world’s first truly mobile, hand held, rapid laser mapping system has been proven to outperform traditional terrestrial laser scanning during field tests in Chile. Supplied by 3D Laser Mapping and operated by Santiago based GEOCOM, the ZEB1 was used to conduct a survey of a stockpile in a covered mining facility. The same area was then scanned using a terrestrial laser scanner and the results were compared. Data capture with the ZEB1 was found to around 5 times faster while automatic data processing, via 3D Laser Mapping’s secure server facility, took less than 5 minutes. Data accuracies and definitions were also found to be well within the specified ranges.

“Using the ZEB1 we were able to capture the entire 100 metre survey area in around 3 minutes,” commented Mr Carlos Escudero, co-founder of Santiago based GEOCOM, “compared to 15 minutes of data capture with the fixed location scanner. Processing of the ZEB1 data was even easier – we just uploaded the raw point cloud to the 3D Laser Mapping server and within 5 minutes we were looking at the processed data.”

Mr Escudero continued, “The detail and accuracy of the data was also excellent exactly meeting the specifications we had been promised; proving beyond doubt the suitability of the ZEB1 for this type of application. We are now confident in using the ZEB1 and marketing it to our client base.”

Developed by CSIRO and commercialised by 3D Laser Mapping, ZEB1 uses robotic technology called Simultaneous Localisation and Mapping (SLAM). The ZEB1 system includes a lightweight laser scanner mounted on a simple spring mechanism, which continuously scans as the operator walks through the environment. As the scanner loosely oscillates about the spring it produces a rotation that converts 2D laser measurements into 3D fields of view. Its ability to self-localise makes ZEB1 ideally suited for use indoors, underground and in other covered environments, where traditional solutions that utilise GPS don’t function well.

GEOCOM has over 20 years of experience in providing advanced solutions for field surveying and is 3D Laser Mapping’s Chilean representative for its range of high tech laser scanning solutions.

CSIRO, the Commonwealth Scientific and Industrial Research Organisation, is Australia’s national science agency and one of the largest and most diverse research agencies in the world. CSIRO works with leading scientific organisations around the world, and is recognised internationally for the quality of its research. CSIRO’s research is performed by the 11 Divisions, which are the business units of CSIRO. CSIRO is one of the largest and most diverse scientific institutions in the world with more than 6500 staff located across 56 sites throughout Australia and overseas. For further information see www.csiro.au
CSIRO’s Digital Productivity and Services Flagship is a $48 million research initiative targeting productivity growth in Australia through frontier services innovation and by unlocking the value of a national broadband infrastructure. Through its research the flagship will help add value to the Australian economy by developing and delivering more efficient and innovative services that improve people’s wellbeing and prosperity. For further information see www.csiro.au/dpas

GEOCOM, Geodesy and Computer Systems was founded in 1985 with its headquarters in Santiago, Chile, with the aim to support and provide integrated solutions to professionals and companies who work in the fields of Geodesy, Surveying, Navigation, Geology, Cartography, Geomatics, Hydrography, Oceanography and Earth Sciences in general. GEOCOM has been the pioneer and leader in Chile in the introduction of GPS technology. Today emphasis is concentrated in the different forms of scanning.  GEOCOM SA is a closed stock company formed mainly by two partners, Mr. Carlos Escudero and Gonzalo Bravo, both Engineers, Civil and Commercial respectively. For further information see www.geocom.cl