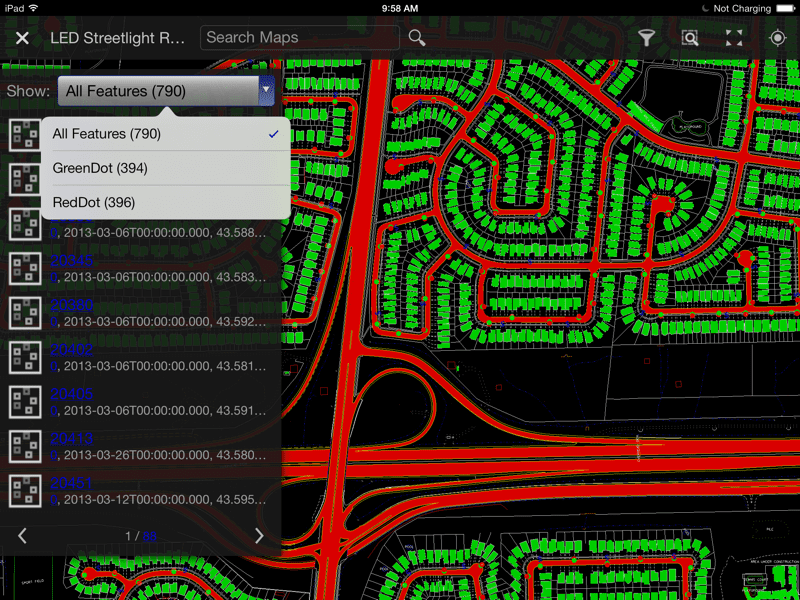 When working in the field, it is important that personnel are able to view and analyze the most current infrastructure data. Bentley’s mobile Apps bring that information to field crews’ fingertips, whether they leverage that data in construction, maintenance, surveying, inspection, or emergency response processes.

Bentley’s mobile Apps solely focus on providing tremendous benefits for organizations involved with infrastructure projects: not only do they enable field workers to make better decisions, but costly rework is also reduced and their productivity is increased ; so is the return on investment on infrastructure data within field processes.

Bentley’s mobile Apps provide field professionals with up-to-date geospatial information and 3D models of the infrastructure they are reviewing, efficient tools to collect inspection data, and a secured way to access AEC project files and data, all while taking advantage of the convenience of a tablet.

Bentley Map Mobile, which was first released in July 2013, enables the publishing of Bentley Map models on tablets, so that infrastructure professionals can share the same data, whether working on a desktop or a tablet.

Bentley Map Mobile ultimately increases information mobility between departments working from the office and in the field, and it enables professionals involved in the same project to leverage that information. It also empowers non-GIS specialists, such as installation and maintenance, construction and engineering field technicians, and field inspectors, to have continuous access to the most up-to-date geospatial information about infrastructure assets and facilities that are managed in a GIS. While this first release supported Android-based tablets, Bentley is about to release a new version which will have iOS support so that Bentley Map Mobile also works on the iPad and iPad mini. Bentley will also release new improved versions of this mobile app during the first half of 2014, including the ability for field personnel to mark up the infrastructure information in the field. This new functionality will leverage field work to update the GIS, and consequently improve the quality of the database while reducing data update costs. In 2014, Navigator Mobile will have mark-up functionality, so that closed-loop markup workflows from the field will be synchronized back to the data source and available for immediate action. Already available for iOS-based devices, it will also offer support for Android devices.

Upcoming capabilities include hyperlinking, which provide users with immediate access to supporting documents for specific objects through hyperlinks embedded in each object; and sectioning, which enable users to create more precise views of only the part of the model needed for reference using vertical, horizontal or box sections of a model.

Mike Rahl, director, structures, Montana Rail Link, Inc., said, “The InspectTech Collector Mobile iPad app is allowing our inspectors to enter data as they are performing an inspection, making our team much more productive. This is not only a huge time saver but we are getting very accurate data for each inspection that we now perform. The app is very easy to use and the camera on the iPad being linked into the app is also a great tool that we utilize with all of our inspections.”

Field Supervisor, released in July 2013, extends the reach of information securely managed by Bentley’s ProjectWise and eB, as well as data stored in other user repositories, including SharePoint, to construction workers in the field – providing both online and offline access. The app uniquely provides true federated data access, and a software development kit allows users to connect to other data sources such as Documentum, Oracle, SAP, Dropbox, Aconex, Box.net, SkyDrive, Google Drive, and FileNet.  Field workers can make confident, real-time decisions using the most relevant, current, and complete project information.

New and upcoming capabilities include a geospatial interface providing a one-click option to access project information by viewing nearby projects in a geospatial view, roundtrip workflows allowing for photos from the mobile device and documents modified using other apps to be imported into the connected data sources, and support for Android and Windows 8 devices in addition to iOS devices.