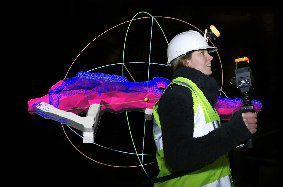 A ZEB1 hand held laser mapping system is being used to map excavations at a historic gold mine in South Africa. Mining has been taking place at Barberton Mines in the Mpumalanga province since 1884 during which time mine managers have employed a range of surveying techniques and technologies. The latest innovation in surveying is allowing for 3D measurement of mined out excavations at depths of up to 1,450 metres. The ZEB1, purchased from 3D Laser Mapping, is exceeding all expectations in terms of accuracy, productivity and performance.

“The results we are getting using the ZEB1, combined with our Mine Works GIS, are better than we could have imagined!” commented Koos Verster, Chief Surveyor of Barberton Mines Ltd. “We normally strive for 95 per cent or higher accuracy but this combination is delivering a 100 per cent, not to mention the increase in productivity we have achieved. The ZEB1 is also withstanding our difficult environment, performing better than we hoped. It has been to some of the most extreme reaches of the mine, for prolonged periods of time, yet shows no undue effects.”

Prior to the introduction of CAD in the early 90’s, Barberton Mine conducted the majority of stope survey work through offsetting with a 2D tabular deposit method. This did not highlight features such as folding, branching, thickening or thinning of mineralisation. Following the introduction of CAD in 1994 measurements were made using a hanging compass and clinometer. This method was far more accurate and enabled the production of 3D models but was, however, very time consuming.

“Our previous working practices had been in place for a long time,” continued Verster, “and we often had to make compromises between accuracy and survey time. All of these issues have been overcome since we started working with the ZEB1.”

The Barberton Mine is located 10 kilometres north east of the gold rush town of Barberton in the Mpumalanga province, 260 kilometres to the east of Johannesburg. The lode gold deposit is hosted in a volcanic and sedimentary sequence of the 3.5 billion year old Barberton Super Group. The extreme age and complex structural history of the ore body have resulted in a wide spectrum of lode shapes and dimensions. Various mining methods are employed due to variations in the deposit from the mine entrance level to depths of 1,450 metres, but the majority of tonnes mined are by semi-mechanised cut and fill.

CSIRO, the Commonwealth Scientific and Industrial Research Organisation, is Australia’s national science agency and one of the largest and most diverse research agencies in the world. CSIRO works with leading scientific organisations around the world, and is recognised internationally for the quality of its research. CSIRO’s research is performed by the 11 Divisions, which are the business units of CSIRO. CSIRO is one of the largest and most diverse scientific institutions in the world with more than 6500 staff located across 56 sites throughout Australia and overseas. For further information see www.csiro.au
CSIRO’s Digital Productivity and Services Flagship is a $48 million research initiative targeting productivity growth in Australia through frontier services innovation and by unlocking the value of a national broadband infrastructure. Through its research the flagship will help add value to the Australian economy by developing and delivering more efficient and innovative services that improve people’s wellbeing and prosperity. For further information see www.csiro.au/dpas