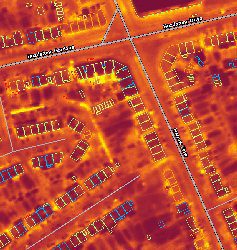 Thermal imaging and laser scan data collected by aircraft is helping Harrow Council tackle the growing problem of unscrupulous landlords renting out sheds and outbuildings as dwellings. Supplied by aerial mapping company Bluesky, the map accurate thermal images are combined with detailed LiDAR measurements to give staff at Harrow Council a much better understanding of where unpermitted developments may have been erected and their potential occupation evidenced as ‘hot spots’ in the data. The Bluesky data is being combined with additional Council information such as waste collection, parking permits and noise complaints, for example as part of the government funded ‘Hot Harrow’ project.

“The combination of thermal survey data, LiDAR, Council information and additional intelligence from third parties gives us a truly holistic picture of the borough,” commented Matt Pennells, Senior GI Officer and Web & GIS Project Manager at Harrow Council. “While ‘beds in sheds’ is a serious and growing issue there are a number of other applications of this intelligence. The Bluesky data will feed into energy efficiency improvement projects and helps us tackle fuel poverty and the LiDAR data will be used for flood modelling and 3D visualisations.”

“The ‘Hot Harrow’ project with funding from the Department for Business Innovation and Skills will also allow us to develop models and working practices to share these valuable resources with residents and businesses, opening up a host of other application areas,” continued Pennells.

The Bluesky data supplied to Harrow Council included property level map accurate thermal infrared images which can be used to highlight different levels of heat loss between individual properties and ‘unexpected hot spots’. When combined with additional data, within the Council’s Geographical Information System, these images can be used to identify and target individual properties for energy efficiency works or even support with fuel bills. ‘Hot spots’ in the data may also indicate illegal dwellings requiring further investigation and have already uncovered a number of cannabis factories.

Bluesky’s ability to simultaneously capture LiDAR (Light Imaging Detection and Ranging) was an important consideration to Harrow Council. LiDAR systems use aircraft mounted lasers to accurately determine the distance between the sensor and the ground or other targets such as buildings and vegetation which in turn provides the accurate height of buildings, vegetation and the ground. “The LiDAR data is another piece in the data jigsaw,” concluded Pennells, “allowing us to identify developments not shown in other datasets such as our OS mapping and model different scenarios and options in 3D.”

Open Data Breakthrough Fund: The Department for Business Innovation and Skills (BIS) recently released £1 million worth of funding to local government to enable the release of open data. Harrow’s ‘Hot Harrow’ project was one of just nineteen successful applicants from the Open Data Breakthrough Fund. ‘Hot Harrow’ is described as ‘an investigation using GIS technology into the thermal properties in the London Borough of Harrow’. Data is to be openly reusable and will aid service delivery, environmental projects, open data and detection of unsafe dwellings.

Thermal surveys, such as the one commissioned by Harrow Council, are flown during the winter months, in the early evening and after sunset, in order to capture the widest variations in temperature that can occur as a result of poor insulation or excessive energy consumption. The thermal surveys are undertaken using a ‘microbolometer’ thermal camera specifically designed for airborne surveying and ideal for use in aircraft flying at night. It allows measurements of heat loss from property roofs to be recorded with higher precision and more consistent results than other systems currently in use in the UK.

LiDAR (Light Imaging Detection and Ranging) systems use aircraft mounted lasers to accurately determine the distance between the sensor and the ground or other targets such as buildings and vegetation. Bluesky uses an Optech Orion M300, the highest specification instrument being operated from a UK base. This allows for the capture of LiDAR data at a higher point density and at a better accuracy than other systems due to an increased pulse repetition rate. The system also includes the latest available technology in global positioning and inertial measurement for improved accuracy sensor positioning.

Bluesky has unrivalled expertise in the creation of seamless, digital aerial photography and maintains national “off the shelf” coverage of aerial photography, DTM and DSM through an on-going update programme.  By purchasing a world first sensor for the simultaneous capture of LiDAR, Thermal and Aerial Photography data Bluesky is in an enviable position of being able to provide customers with unique and cost effective solutions.

Comments are disabled
NEXT ARTICLE
A Decaying Tangle of Gas Pipes Beneath Our Cities
March 24, 2014
PREVIOUS ARTICLE
Maryland Planning Maps Focus on Septic or Sewer
March 23, 2014