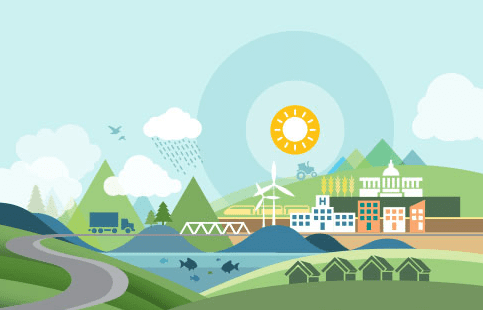 Esri plans to focus its initial efforts on 12 large and small communities, including New Orleans, Louisiana; Wake County, North Carolina; and Tamarac, Florida, to develop practical methods and approaches based on GIS technology that address the most pressing needs of the communities. Esri will continue its plan by publishing a series of maps and apps developed in conjunction with these communities that will be shared openly. Communities around the world can use the solutions to make progress toward becoming more resilient.

Esri is also launching a climate-focused geo-collaboration portal today. It is a place where citizens and professionals can go online to discover, contribute, and share resources critical to confronting the impacts of climate change. This website will offer a starting point for open data and ideas. It will evolve over time and grow as more scientists, government entities, and the public use it.

“We felt it was important to establish this collaborative network of individuals and organizations who use GIS to come together to combat the impacts of climate change,” said Esri president Jack Dangermond. “As governments, businesses, innovators, and citizens work toward this common goal, both a knowledge base and real-world tools will be created that people around the globe can use to build more resilient communities.”

Both the local government focus group project and geo-collaboration portal complement the Esri Climate Resilience App Challenge, which launched last week in front of thousands of GIS developers at the Esri Developer Summit. The app challenge supports the White House Climate Data Initiative as it inspires developers to focus their creative attention on making maps and analytical tools that help communities see, understand, and prepare for climate risks. It is open to everyone – independent developers and those in startups, governments, academia, and NGOs. The resulting apps will be openly shared and Esri will award prizes to the winners. In July, the best of the best will be featured at the Esri International User Conference where more than 15,000 people gather to learn new practices they can use to make a positive difference in their own work.