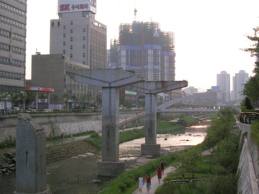 Demolition work began on 6 February. By the end of August, the Ahyeon overpass will have been replaced by another, greener bus-only lane. Seoul has decided to remove the structure, a symbol of South Korea’s high-speed development. Originally built in 1968, the 1km-long highway was located close to Hongik, a vibrant student neighbourhood in the city centre. In those days, the city council was led by Kim Hyun-ok. Aged only 39 when he got the job, he soon came to be known as Bulldozer Kim. He was often seen on building sites, sporting a helmet marked “Charge”. A close ally of the dictator Park Chung-hee (father of the current president, Park Geun-hye), he initiated a major public works programme that radically changed the skyline.

Elevated expressways were a key feature of Kim’s projects, and the first to be built was the Ahyeon overpass. It was intended as part of a never completed link road running from east to west across the capital. To cope with the massive increase in population and traffic during the 1980s, 101 expressways were built. They were quick to put up and much cheaper than extending the underground. This policy reflected “the speed-oriented, top-down urban planning methods of the old days,” says Kim Ki-ho at Seoul University.

Read more in The Guardian