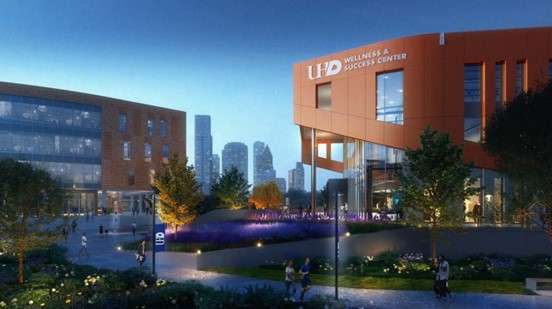 HOUSTON (Jan. 20, 2023) – On the cusp of its 50th anniversary, the University of Houston-Downtown (UHD) ushered in a new era today with the official opening of its Wellness & Success Center (WSC). Designed by SmithGroup in association with HarrisonKornberg Architects and built by Vaughn Construction, the $39 million, 75,000-square-foot facility not only expands UHD’s footprint and visibility, it also establishes a dynamic core and recognizable landmark for fostering and nurturing an on-campus community.

“The reality is that the name of this building is synergistic in nature,” stated Blanchard. “We are focused on the wellness of our students because we know that their success depends upon all of their basic needs, including physical and mental well-being, being met. They are much more likely to graduate, experience socioeconomic mobility, and, ultimately, become leaders in their professions and communities by living healthy lifestyles.”

Blanchard continued, “The opening of the Wellness & Success Center advances not only student well-being and success at UHD, but also the physical and mental wellness of our faculty, staff, alumni, and community members. I could not be more pleased that student advocacy and support helped to bring this important addition to our campus to fruition, and I look forward to seeing our student body take full advantage of this wonderful facility.”

“The Wellness & Success Center will be a game changer in terms of the greater quality and space of exercise facilities and programs that will be available for the University community,” added Richard Sebastiani, UHD Director of Sports and Fitness. “It also demonstrates UHD’s commitment to student wellness on campus. We expect the Center to make a positive impact on student recruitment and retention in addition to improving the quality of student life on campus.”

In the near future, affiliates and friends of the University will be eligible to purchase half-year or annual memberships to the Center. “As we aspire to be an Anchor Institution, we know that the Wellness & Success Center will play a major role in solidifying UHD’s relationship with not only those who live and work in Downtown, but also those living in the communities surrounding our campus,” said Blanchard.

With its bold architecture, the Center brings a sense of place to the urban campus. Located on the western edge of the campus, the Center is bordered by the White Oak Bayou Greenway to the west, the I-10 interstate expansion project to the north, and the existing College of Sciences & Technology (CST) building to the southeast.

The building’s transparent, three-story entrance with a prominent overhang canopy faces the Bayou Trail, a part of the Campus Loop pedestrian route, and the Marilyn Davies College of Business on the other side of Main Street. The Center pairs extremely well with the adjacent CST building, which opened in 2019. The synergy of entry plazas between the two buildings establishes a landmark for the growing campus.

The grand entrance welcomes visitors, rewarding them with outstanding views of the Downtown skyline once inside. The three-story lobby leads to a student lounge area with seating for socializing and casual study. It flows into an outdoor terrace that capitalizes on the building’s best Downtown views. Students can also prepare food and share a meal in the adjacent community kitchen or find respite in the quiet spaces of the wellness suite.

Beyond the locker rooms, fitness amenities fill three floors: strength training and conditioning on the first level, personal workout areas and cardio equipment on the second level, and group studios on the third. Ample use of glass brings in natural light and offers visual connections among fitness areas, the central lobby area and the outdoors. On the building’s north end, a two-story bay houses three sports courts ringed with an elevated indoor track. The Center also houses three times the number of pieces of equipment as before, a customized bouldering wall, a demonstration kitchen for nutrition workshops, massage/personal training spaces and a parking garage.

Fun facts surrounding the design and construction of the Center include:

Prior to the new Center, the Jesse H. Jones Student Life Center served the University as a hub for student activities for 25 years. ​In the intervening years, student enrollment has nearly doubled and increased the demand for more exercise classes and sports and wellness options.

The Center was funded by a student referendum pushed forward by UHD’s Student Government Association and approved by state legislation. In 2019, UHD alumna and State Rep. District 144 Mary Ann Perez authored House Bill (HB) 1277 during Texas’ 86th Legislative Session authorizing a dedicated student fee to support the project. State lawmakers approved HB 1277. Previously, the UHS Board of Regents and UHD students voted to approve the fee for this new facility. The UHS Board of Regents approved the site and program plans for the WSC in 2019, with construction beginning in April 2021.

Learn more about the University of Houston-Downtown at www.uhd.edu.

About the University of Houston-Downtown

The University of Houston-Downtown (UHD) is the second-largest university in Houston and has served the educational needs of the nation’s fourth-largest city since 1974. As one of four distinct public universities in the University of Houston System, UHD is a comprehensive, four-year university led by President Loren J. Blanchard. Annually, UHD educates approximately15,000 students, boasts more than 64,000 alumni, and offers 46 bachelor’s degrees, 11 master’s degrees, and 19 online programs within four colleges: Marilyn Davies College of Business, College of Humanities & Social Sciences, College of Public Service, and College of Sciences & Technology. For the fourth consecutive year, U.S. News & World Report ranks UHD among universities across the nation for Best Online Criminal Justice Programs (No. 27 and No. 15 for Veterans) and Best Online Bachelor’s Programs. UHD has the most affordable tuition among four-year universities in Houston and one of the lowest in Texas. U.S. News ranked the University among Top Performers on Social Mobility. The Wall Street Journal/Times Higher Education awarded UHD a No. 1 ranking as the most diverse institution of higher education in the South and No. 18 in the nation. The University is noted nationally as a Hispanic-Serving Institution, a Minority-Serving Institution, and a Military Friendly School. For more on the University of Houston-Downtown, visit uhd.edu.