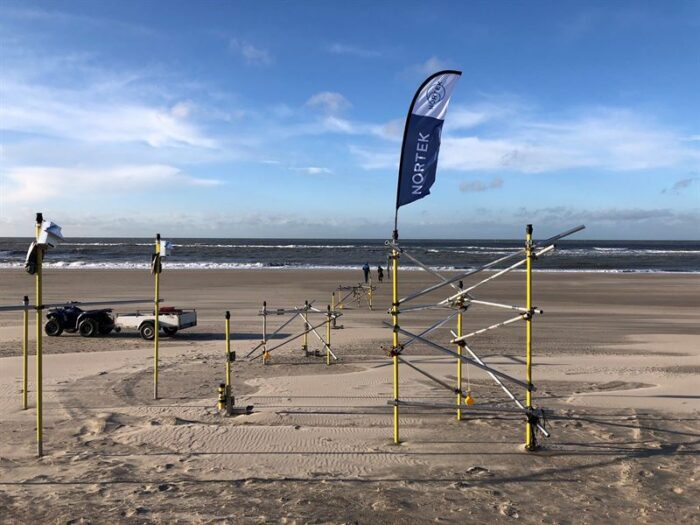 A series of instruments were placed on land and in the water immediately in front of the artificial dunes constructed by the researchers. This allowed the team to capture the waves as they moved from offshore toward the dunes. (Photo: TU Delft)

As sea levels continue to rise and storms intensify, countries such as the Netherlands – where a third of land is below sea level – are becoming increasingly concerned about coastal erosion.

The Dutch have embraced numerous techniques to keep water at bay, but their dune systems are the primary defense against the sea. Understanding how resilient these systems are to coastal erosion is essential. The Dutch government “uses dune erosion models as the basis of their management,“ Dr Jantien Rutten, a post-doctoral researcher at Delft University of Technology (TU Delft), explains.

However, these models need to be validated using instruments such as Nortek’s Signature1000 acoustic Doppler current profilers (ADCPs) and Vector velocimeters, which are capable of measuring complex processes in situ. For example, Rutten and her colleagues at the RealDune/REFLEX project are particularly interested in understanding how infragravity waves play a role in eroding these protective dunes.

How waves erode the coast

Most waves are generated by the wind blowing across the sea surface. When wind-generated waves reach the coast, they tend to break on the shore, dissipating their energy quickly.

Infragravity waves arise as ocean swell interacts with the wind-generated waves. They tend to start very small but grow in size as they move toward the shore.

“The energy is transferred from the wind-generated waves into long waves,” explains Dr Marion Tissier, Assistant Professor of Ocean Waves at TU Delft.

“When these longer waves reach the beach, they don’t lose as much energy as short [wind-generated] waves, so they travel much further up the beach,” says Rutten.

Sometimes, infragravity waves travel so far up the beach they reach the dunes. The backwash then takes sand from the dune with it, causing erosion.

Measuring the impact of infragravity waves

To quantify the erosional impact of infragravity waves, the RealDune/REFLEX researchers needed to capture data from land and water across an entire storm season. The team constructed two artificial dunes at De Zandmotor beach. They placed a series of ADCPs in deeper waters a few kilometers offshore from the dunes, along with velocimeters in the shallower waters.

ADCPs measure wave conditions well in deeper waters, but “as waves move towards the coast, they become steeper and eventually start breaking. That kind of process is best measured with a Vector,” Nortek’s Rikke van der Grinten explains.

The instrumentation can also help the researchers understand how much of the infragravity wave energy originates from the Dutch coast and how much is reflected from more distant coastlines, such as those in the UK.

“This is important because we typically neglect the remotely generated infragravity waves when assessing coastal safety,” says Tissier, noting that this omission could mean models are underpredicting dune erosion.

The team has begun the processing of their data. “We are starting to look at separating the different types of infragravity waves and quantifying their direction and energy,” Tissier says.

The results of the RealDune/REFLEX projects interest researchers in the Netherlands and beyond as infragravity waves become increasingly important for understanding coastal erosion. Dr Rutten prepares one of the Vectors for deployment in shallow waters in front of the artificial dunes. (Photo: TU Delft) We pride ourselves on being innovative in product development and production processes. Nortek provides solutions to engineers and scientists by offering real-time data collection and support from our responsive technical team.

Nortek’s headquarters are just outside Oslo, Norway, where R&D, product assembly and other main functions are situated. In addition, we have subsidiaries in the US, the UK, China, Japan, Australia, Brazil, France and the Netherlands.