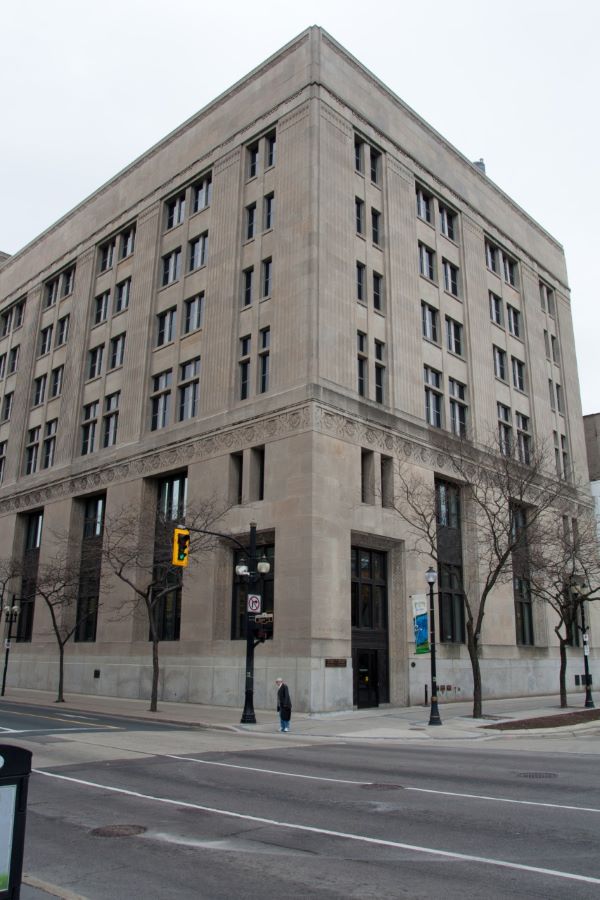 The Man John Sopinka was born in Broderick, Saskatchewan in 1937 and lived there until his Ukrainian Canadian family moved to Hamilton, Ontario in 1939. He completed secondary school at Saltfleet High School in Stoney Creek and earned Bachelor of Arts and Bachelor of Laws degrees at the University of Toronto . While studying law, he also played professional football with the Canadian Football League ,Toronto Argonauts (1955 to 1957) then the Montreal Alouettes  (1957). A noted trial lawyer, he was appointed directly to the Supreme Court of Canada on May 24, 1988 without ever having been a judge. At the time it was highly unusual for a Supreme Court of Canada appointee to have had no prior judicial experience. John Sopinka died in Ottawa on November 24, 1997 of a blood disease.

The Site History Before the John Sopinka Court House was at the corner of King Street and John in Gore Park there was an ornate post office building, but before that was the McInnes building. This was a four- storey wholesale dry goods warehouse that was built in 1856. The burnt- out shell of the McInnes Building (left) on the south-west corner, King Street East, and John Street.  August 1, 1879, was the date of the famous McInnes fire, which destroyed the magnificent block. In 1882 the federal government purchased the site of the old McInnes building.

The doors of the John Street Post Office were opened to the public on October 23, 1886 and stayed open for 48 years (right). The building was demolished in 1935.  The style of architecture was described as a mixture of Elizabethan and Corinthian. Erected on the site of the earlier 1886 Post Office, the new Dominion Public Building (right) was built to accommodate not only the post office but also Customs and excise, national health, immigration, and various other federal departments, all brought together for the first time in Hamilton under one roof. The Modern-Classical building was six storeys high with the main entrance located on John Street. The structure was erected as part of a Depression works program introduced by the government in 1934 under the Public Works Construction Act. Hamilton’s Dominion Public Building has been ranked as one of the three best examples of the large federal public buildings which were erected across Canada between 1934 and 1939. The Hamilton firm of Hutton and Souter, well known for other major works such as the Cathedral of Christ the King, provided the plans. The main Post Office was in this building for over fifty years, closing in 1991, when the Province of Ontario purchased the building for conversion to a new court facility, consolidating the Provincial and General Division courts in what is now the John Sopinka Courthouse.

The Substrate Predominantly structural clay tile – Speedtile (insert) which describes a category of burned-clay building materials used to construct roofing, walls, and flooring for structural and non-structural purposes, especially in fireproofing applications. Also called building tile, structural terra cotta, hollow tile, and clay block, the material is an extruded clay shape with substantial depth that allows it to be laid in the same manner as other clay or concrete masonry. In North America it was chiefly used during the late 19th and early 20th centuries, reaching peak popularity at the turn of the century and declining around the 1950s. Structural clay tile grew in popularity in the end of the nineteenth-century because it could be constructed faster, was lighter, and required simpler flat falsework than earlier brick vaulting construction. Each unit is generally made of clay or terra-cotta with hollow cavities, or cells, inside it. The most popular and enduring form of structural clay tile is its use in vertical applications as a structural element. In the vertical application, structural clay tile blocks are used in both columns and load bearing walls. Likewise, structural clay tile blocks were frequently used as backing for exterior walls, often filling the voids behind architectural ornament, stone, or brickwork In early steel construction, clay tile blocks were historically used as infill between structural members, which provided much needed lateral support. In some cases, entire walls were created out of structural clay tile, typically multiple wythes thick. The cells of these blocks could be either unfilled or filled with reinforcing and grout. It continues to be used in Europe to build fire-resistant walls and partitions. In North America the material has largely been replaced by concrete masonry units (CMU).

The Investigation a+LiNK Architecture was retained by Infrastructure Ontario to provide an investigation, analysis and proposed solution for the stone façade restoration of the historic courthouse in Hamilton, Ontario. As Heritage Consultant, a+LiNK provided specialized knowledge to preserve the cultural heritage of the notable building.a+LiNK Architecture Inc. believes that our historic buildings provide us with a sense of place and that preservation is vital to our communities. When they preserve our heritage buildings and resources, they are providing the ‘greenest’ of projects by saving them from our landfills. A+LINK is committed to the preservation, restoration, and adaptive reuse of these existing resources for long-term sustainability and for the appreciation by future generations. Restoration included repairs to five storeys of stone on the building envelope, original masonry components and metal canopy. The backup wall capacity was still of concern. To this end, extensive and successful, testing was conducted.

The Solution The a+LiNK team used Cintec’s cimentitious grouted reinforcement system to reattach the stone to the brick and speed tile (structural terracotta) backup wall. The anchors attached both adhesively and mechanically, ensuring fireproofing and progressive failure instead of brittle fracture. Further, because of the bulbing action caused by failure of the system’s original mechanical attachment, loads were distributed over larger areas than other systems would muster, so the fragile backup wall could withstand the required loads, including wind. A Cintec SRT (solid rod threaded) was decided upon.

No doubt, the following Cintec Reinforcement Systems Salient Points were a major consideration  by a+LiNK  and others in their determination of a solution.

Cintec’s anchoring and reinforcement system “Presstec” grout is CEMENTATIOUS. This all natural, proprietary grout is of high strength with no additives and very good bond capacity. TESTED IN ACCORDANCE WITH ASTM C1019-18

Cintec’s anchoring and reinforcement system can be INSTALLED IN WET OR DUSTY CONDITIONS. This is very important, as many sites do not provide “ideal” installation conditions with respect to moisture, dust presence or precision hole creation and the failure of the installer to create these ideal conditions may lead to anchoring failure with other systems. The presence of water or dust or even less than exact hole diameters is of no consequence – in fact, Cintec anchors and reinforcement can and have been successfully installed under water.

Cintec’s anchoring and reinforcement system can only be INSTALLED BY CINTEC TRAINED AND CERTIFIED installers. As part of our quality control, extensive training of all installers is mandatory by Cintec personnel. Cintec product is only available to the project via Cintec Reinforcement Systems thus eliminating the possibility of contractors obtaining product independently and installing with less than qualified people.

Cintec’s anchoring and reinforcement system has been TESTED TO BE FIREPROOF. A major and common application of Cintec anchors is for seismic upgrading and as such the fireproof characteristics of this product are critical. Often, earthquakes result in fire and any anchoring system not fireproof and resistant to high heat conditions could easily result in anchoring failure and possible human injury or death. EXCEEDS  ASTM E119

Cintec’s anchoring and reinforcement system is PULLOUT CAPACITY ENGINEERED to required load capacity. All Cintec anchors and reinforcements are custom made and project specific to address required capacities. We do not use a “one size fits all” approach in selection and manufacturing of anchoring solutions. Please visit the engineering aid section following for extensive information and design criteria.

Cintec’s anchoring and reinforcement system has been TESTED TO 150 FREEZE/THAW CYCLES. Public Works and Government Services Canada (PWGSC) commissioned and paid for thorough testing of Cintec product for Pull Out and Freeze Thaw by the University of Manitoba – Structural Department. As a result, Cintec product is “sole sourced” on many federal projects. ASTM E1512  ASTM C666/C661M

Cintec’s anchoring and reinforcement system has been TESTED TO RESIST SEISMIC action. As stated earlier, seismic upgrading of structures – worldwide, is a major and common application of the Cintec system.

Cintec’s anchoring and reinforcement system DOES NOT RESULT IN BRITTLE FAILURE. Although very important, this factor is often overlooked in anchoring solutions. Simply stated, brittle failure is experienced in systems that hold… then fail. Cintec’s progressive failure (by design) allows for release when critical loads are reached but not instant total failure. A rough analogy might be the difference between a blow out versus a slow leak in a car tire.

Photo (left) is of set up used in testing. Plywood Plate (12” X 12” X ¾” thick) was used to distribute load over uneven surfaces and eliminate point loads except as placed on the body of anchor / substrate to be tested. The Port ensures that full load is made to anchor and that its movement (potential) or failure of substrate is not compromised. The Deflection Plate transfers any anchor body movement / substrate failure to the Deflection Meter. The Load Cell imparts required load to anchor body and loading level is shown on the Load Meter. Given low load requirements it is expected that there will be some anchor movement (Deflection Meter change) as a result of apparatus settling.

The substrate failure , if realized, would be of the “brittle” type where the substrate could not resist load imparted and would show physical change (cracking / spalling) and be unable to maintain the Held Load.

Comments are disabled
NEXT ARTICLE
PCA Elects 2023 Board of Directors Leadership
December 7, 2022
PREVIOUS ARTICLE
Poralu Marine, the world leader in the design of aluminum marinas, is setting its sights on its new floating waterfront development business unit
December 6, 2022