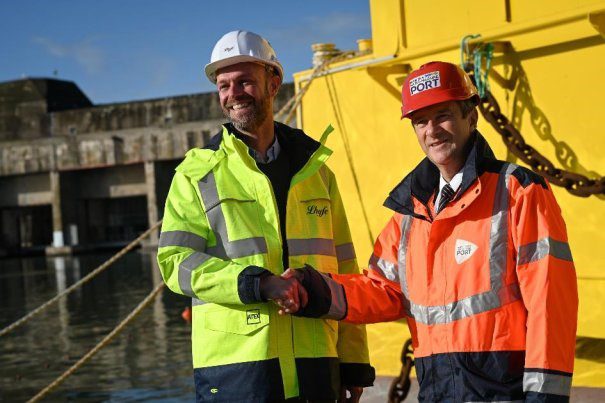 Nantes and Saint-Nazaire (France) – Lhyfe (EURONEXT : LHYFE), a world pioneer for the production of green renewable hydrogen, and Nantes – Saint Nazaire Port, France’s fourth largest seaport, have reached a partnership agreement so as to develop the offshore renewable sector and thereby ramp up energy transition on the Loire Estuary.

Hydrogen is able to draw on the strong momentum driven by the national strategy for the development of carbon-free hydrogen in France, and as will offshore wind power, this energy source will be called upon to play an increasingly important role in the French and European energy mix.

At the end of September in the Saint Nazaire dock basins, Lhyfe launched its Sealhyfe project to deliver the world’s first offshore renewable hydrogen production prototype, which will have a capacity of 1 MW and will be connected to a floating wind turbine.

Nantes ‒ Saint Nazaire Port is strongly committed on many fronts to energy transition in Greater Western France. The Port Authority is focussing on the energy sources of tomorrow and is studying the possible deployment scenarios for the hydrogen sector within its port ecosystem, with the ambition of making Nantes ‒ Saint Nazaire the first major port facility for hydrogen on France’s Atlantic Seaboard.

Supported by their converging visions of the future, Nantes ‒ Saint Nazaire Port and Lhyfe have naturally chosen to combine their efforts and areas of expertise in order to identify, to understand and to assess the conditions for the establishment of a supply chain associated with offshore hydrogen production.

This collaboration is intended to identify the port areas and facilities capable of accommodating R&D prototypes and being utilized to try out innovative solutions. The partnership also focusses on the identification of the industrial requirements involved in the construction of the equipment to be used to produce offshore hydrogen on a mass scale, and on the port infrastructures necessary for the production, launching and integration of those future items of equipment. Lastly, the two parties will deliberate together on how best to bring ashore the renewable hydrogen mass-produced at sea, so as to define the requisite industrial and logistical requirements for the reception and injection of the gas into the land-based network.

“The development of offshore hydrogen production is the next major challenge awaiting us. Following the integration and inauguration of our Sealhyfe platform at the Saint Nazaire port facility, we are going to pursue our collaboration with this port facility, which possesses a great deal of related expertise, to accelerate the development of solutions that will make it possible to decarbonize mobility and industry on a massive scale, in all coastal regions.”

Olivier Trétout, Chair of the Management Board of Nantes ‒ Saint Nazaire Port

“Over the course of several years now, energy transition has become a reality at the Port of Nantes ‒ Saint Nazaire. We are confronted by climate and energy challenges that require us to speed up our actions and to rapidly identify new solutions. Green hydrogen is a sector of the future in which we have great faith, as do many of the Regional Community’s industrial and institutional players. The Port of Nantes ‒ Saint Nazaire has the credentials to be a major port facility for the accommodation of that sector of activity. The partnership agreed with Lhyfe constitutes an essential first stage in the process of identifying the requirements for the large-scale deployment of renewable hydrogen production.”

Launched in Nantes (France) in 2017, Lhyfe produces and supplies green and renewable hydrogen for mobility and industry. Its production plants and upcoming projects are designed to provide green and renewable hydrogen in industrial quantities and form part of a virtuous energy model benefitting the environment. The company is a member of France Hydrogène and of Hydrogen Europe.

Lhyfe inaugurated its first renewable green hydrogen industrial production site in the second half of 2021. The company has a commercial pipeline representing a total production capacity of 9.8 GW by 2030 (figure as of September 2022). Following an offshore research programme initiated in 2019, a test phase in real conditions for the world’s first offshore renewable green hydrogen production pilot site linked to a floating wind farm was started in September 2022.

For more information go to www.lhyfe.com

An industrial tool for economic growth and a regional planner and developer, Nantes ‒ Saint Nazaire Port works in partnership with the Regional Community’s public- and private-sector stakeholders to enhance the Loire Estuary on an economic level and on an environmental level. It forms a strategic interface between land and sea, receiving nearly 3 000 calls by merchant vessels each year, and acts as a real international hub for industrial and logistical operations. According to a 2022 study based on 2018 data conducted by INSEE, the French National Institute of Economic and Statistical Information, the activities at the Port of Nantes − Saint Nazaire generate 28 500 jobs at around 730 establishments forming a single industrial and port complex. The Port owns a Port Authority area covering 2 722 hectares, of which 1 545 hectares are developed port, logistical and industrial zones, and 1 177 hectares are reserved natural spaces.

Being committed to the process of energy and ecological transition, Nantes ‒ Saint Nazaire Port supports the development of complementary solutions representing an alternative to fossil fuels. The Port Authority assists and facilitates the advancement of projects furthering the production of renewable energy in its Port Authority area.

More information is available at www.nantes.port.fr