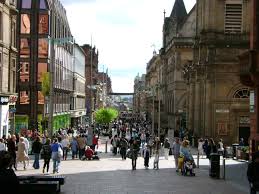 The AGI (Association for Geographic Information) are pleased to announce that the programme for Geo: The Big 5 – Future Cities has now been released. The event takes place in Glasgow City Chambers on 18th March and is hosted by AGI Scotland.

As the opening event of Geo: The Big 5 the AGI are proud to be able to announce such a strong lineup of speakers with a plenaries from Professor Iain Stewart  BBC staple and geology’s ‘rock star’ and Andrew Collinge (Assistant Director at the Greater London Authority).

This is a multi stream event with one stream focused on the key theme of Future Cities, a second broader Geospatial Best Practice Stream and a third workshop stream. In addition to Andrew Collinge the Future Cities stream also features presentations from the Glasgow Future Cities Team, the Institute for Future Cities and Glasgow City Council among other future cities experts from around the UK.

The best practice stream also fields a strong variety of content including presentations from Angus Council, Scottish Water, Glasgow 2014 Commonwealth Games and Forestry Commission Scotland. Chaired by members of the AGI Scotland Committee, these speakers will give an inspiring overview of recent projects from their organisations.

Finally, both Ordnance Survey and thinkWhere will be providing an opportunity for delegates to pick up practical experience in workshop sessions. This is a great opportunity to find out more about open source GIS package QGIS and Ordnance Survey Open Data with the aim of taking some practical skills back to work.

About Future Cities
We’re living in a time of rapid urbanisation, where shifting global demographics (growing in number, age and prosperity as they migrate from rural to urban life styles) are going to have an increasing impact on our activities here in the UK. For London, the population will grow to 9M by 2021 and 10M by 2030. That brings with it considerable pressures – for example, the need for 800K extra house units, capacity for an additional 600K peak-time commuters, and the challenge of dealing with the increased waste and energy consumption.  The Future or Smart City is the collective response to these immense challenges. It is not one thing or one technology, but a proactive approach to managing the urban infrastructure to provide a better level of service and living with less available resources.

This event, being held in the impressive Glasgow City Chambers, will enable delegates alike to come away with a renewed appreciation of how Geospatial Information and Systems (GIS) can contribute to overcoming the barriers of a City becoming a FutureCity. To understand a modern city is to understand how its occupants utilise the space over time. However much of the discussion around future solutions to meet the increased and changing demands being placed on a city, are not addressing the inherent geographic nature of the problem. This is perhaps being exacerbated by the GI industry not sufficiently  articulating the benefits it can bring.

About Geo: The Big 5
Geo: The Big 5 is a series of national events that will tackle the big issues in GeoSpatial in 2014:

A wide range of challenges and opportunities are facing the GeoSpatial sector resulting from changing markets, a shifting policy landscape and of course new technologies and expectations. Many of these will affect most if not all of the GeoSpatial sphere and this is where Geo: The Big 5 is different. Other geo events focus on particular areas of the industry or certain technologies, platforms and techniques. Geo: The Big 5 takes a more holistic approach that sweeps across the breadth of the industry. The series will culminate in a two day conference ‘GeoCom: The Changing Face of Geo’ which will pull bring together the discussions for the rest of the Big 5 and set the agenda for Geo going in to 2015 and beyond.