/ Energy / Adjustments to Dam Operation Has Huge Impact on Salmon

Adjustments to Dam Operation Has Huge Impact on Salmon 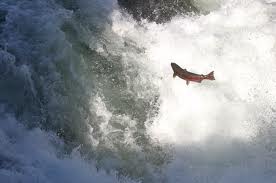 By adjusting water discharges in ways designed to boost salmon productivity, officials at a dam in central Washington were able to more than triple the numbers of juvenile salmon downstream of the dam over a 30-year period, according to a study published Feb. 25 in the Canadian Journal of Fisheries and Aquatic Sciences.

“This is one of the most productive populations of fall Chinook salmon anywhere in the Pacific Northwest,” said Ryan Harnish, first author of the paper and a fish ecologist at the Department of Energy’s Pacific Northwest National Laboratory. “Much of this productivity can be attributed to the way in which operations of Priest Rapids Dam have been altered over the past 30 years.”

The major point of the paper is simple: Keeping eggs and young salmon under water, especially at their most vulnerable times, boosts their survival.

“The timing of life stages in relation to water temperature has been studied so extensively for this population that we have a good idea of when the eggs will be hatching, when the young fish will emerge from the gravel, and when the smolts will migrate to sea,” added Harnish. “This allows for water flows to be planned around these life events, to minimize the risk that the eggs and the young fish below the dams will be dewatered.”

While dams are known for the physical barriers they impose to migrating salmon, the way that dams hold back and release water for flood control and production of electricity can also have a huge impact. Two of the biggest risks are “dewatering” — when water levels drop so low that young fish or eggs don’t stay immersed in water — and when water levels fall quickly, leaving young fish stranded on the shoreline or entrapped in pools of water that can heat up or dry out.

Harnish and his team analyzed 35 years’ worth of data, from 1975 through 2009, about salmon downstream from the Priest Rapids Dam in an area known as the Hanford Reach. The section of the Columbia River, about 50 miles long and roughly between the communities of Mattawa and Richland, borders the Hanford Site and is one of the longest free-flowing sections of the Columbia River available to salmon. The salmon that spawn in this span of the Columbia — known specifically as upriver bright fall Chinook salmon — are especially prized for their size and quality.

In the mid-1970s, several major dewatering events downstream of Priest Rapids Dam resulted in huge losses of juvenile salmon and spurred two agreements to boost salmon survival. Harnish’s study spanned years before either agreement as well as after the two agreements:

The 1988 Vernita Bar Settlement Agreement (VBSA), designed to prevent dewatering eggs and newly hatched fish, known as alevins, by boosting minimum water levels during incubation. The agreement also altered the pattern of discharge during the spawning period to prevent salmon from depositing eggs in areas that could not be kept under water during the lower flow conditions of winter.
The 2004 Hanford Reach Fall Chinook Protection Program Agreement (HRFCPPA), which maintained constraints set forth by the VBSA and also limited the magnitude of flow fluctuations during the period of juvenile rearing to reduce stranding and entrapment.
Study results

Altogether the team found a 283 percent increase in the freshwater productivity of the Hanford Reach fall Chinook salmon population during the years when the fish protection agreements were in place compared to the period before either agreement was enacted. The study estimated that in the most recent years of the study, more than 52 million juvenile salmon were produced annually, on average, in the Hanford Reach — higher than most people imagined. That compares to about 14 million annually, on average, before either agreement took effect.

“One takeaway message from our study is that the constraints agreed upon 10 and 26 years ago are still working to protect salmon in the Hanford Reach,” said Harnish.

The majority of the increase in productivity was due to constraints enacted as part of the VBSA to prevent the dewatering of salmon nests known as redds. The team saw additional benefit from changes designed to limit stranding and entrapment of young fish, which allowed more of them to reach the pre-smolt stage, when they are big enough to migrate downstream.

“This program is an excellent example of how commitment to sound science and adaptive management can help identify the appropriate balance between resource use and protections,” said Russell Langshaw, a co-author of the paper and a fisheries scientist at Grant County Public Utility District, which runs the Priest Rapids Dam and which funded the study. “Operations at Priest Rapids Dam are altered dramatically to meet constraints of the HRFCPPA. We’re able to provide these protections and meet load demand because of the strong commitment by all operators on the mid-Columbia to act as a coordinated system.

“In a time when abundance and productivity are declining for many salmon stocks, it’s exciting and rewarding to contribute to increases for such an important one,” added Langshaw.

The investigators say the results also show how the existence of dams can actually improve salmon survival. For instance, prior to the development of the hydroelectric system, water flow in the Columbia could drop very low in winter. These low flows, when combined with temperatures below freezing, likely resulted in mortality of eggs and young salmon still in the gravel. Current dam operations maintain minimum water flows that are more than twice as high as historic levels during winter, which keeps young fish in water more consistently than what might occur naturally.

“Our study shows that dams can be used to produce electricity effectively, and with constraints that have been well thought out, those operations can not only have reduced negative impact, but they can positively impact salmon production,” said PNNL ecologist Geoff McMichael, an author of the paper.

In addition to Harnish, Langshaw and McMichael, other authors of the paper include Todd Pearsons of the Grant County Public Utility District; and Rishi Sharma, formerly of the Columbia River Treaty Inter-Tribal Fish Commission and now with the Indian Ocean Tuna Commission.