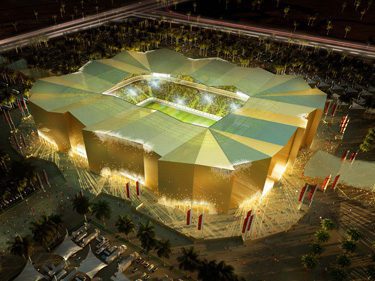 NJIT will be part of an international team of engineers from universities in the U.S., Canada, and Qatar developing a novel system to detect the onset of structural damage on bridges, stadiums and other large public infrastructure.

With a grant of just over $1 million from the government of Qatar, a Persian Gulf nation that has proposed building one of the longest causeways in the world, the three-member team is developing a wireless sensor network that will monitor vibrations, sagging and stresses to assess a structure’s ability to carry its load. The proposed system would not only detect damage after it occurs, but would aim to predict it before it takes place.

“Our part of this project is to determine not only where to place the sensors, but to decide what type of data the system will collect, how to interpret it, and then how to make a decision about where, when, and to what extent to intervene,” said Mohamed Mahgoub, director of NJIT’s Concrete Industry Management (CIM) program and one of the project’s principal investigators.

“While the network can be installed on existing bridges, the aim is to embed it in a structure’s steel bars before the concrete is even poured,” Mahgoub said.

These safety measures are an important consideration for Qatar, which is gearing up to host the 2022 FIFA World Cup and is planning a massive complex of bridges, stadiums, tramways, and tunnels in preparation for it. Meanwhile, proposals to connect to Bahrain by a 25-mile causeway have been under active discussion for the past decade.

The three-year project begins in May with a kick-off meeting at Qatar University to discuss the first steps. The team will install sensors on a couple of existing bridges in Qatar to monitor their behavior by the end of the year.

On campus, Mahgoub plans to hire a post-doctorate fellow to work on the system and recruit undergraduates to analyze the data they will be receiving from the sensors and to construct graphs to illustrate it. The team will also build a small bridge model to test in NJIT’s structural lab.  NJIT has been allocated a portion of the grant to complete its work.

“CIM students at NJIT will learn how to detect and predict concrete damage by analyzing the collected data from the wireless network that is attached to any structure,” Mahgoub said, adding that they will be able to apply what they learn in future construction management jobs “to evaluate infrastructure in the U.S. and around the world.”

His network would also optimize efficiency and cut costs by dramatically reducing the number of sensors used to gather data, as well as the amount of data collected. Sensors would be triggered only when there is movement on the bridge and not continuously as is now standard practice, saving time and labor sifting through reams of data collected in the middle of the night, for example, when it conveys little meaningful information.

“It takes so much time to analyze and much of it is irrelevant,” he said. “We would also save money, labor and traffic interruptions by optimizing when to intervene and make repairs – deciding whether a smaller fix is needed in the short-term or whether it is better to wait for a larger fix.”

Comments are disabled
NEXT ARTICLE
The OGC Approves SensorML 2.0, Advanced Standard for Internet of Things
February 24, 2014
PREVIOUS ARTICLE
Interior Mapping and Routing Helps Students at the University of Washington
February 23, 2014