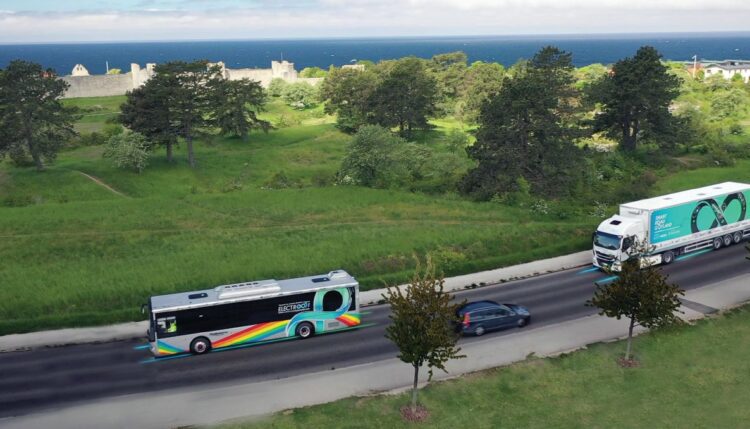 An electric bus and truck are being charged on an electrified road in Sweden as part of the Smartroad Gotland Project, which aims to build knowledge and create possibilities for a large-scale development of electric roads throughout the country.

A consortium of companies has been selected to build the first wireless in-road charging system in the United States.

The transportation sector generates the largest share of carbon dioxide emissions in the United States, according to the U.S. Environmental Protection Agency. To make transportation greener, the agency stresses the need to increase the efficiency of vehicle technology as well as change how Americans travel and transport goods.

In September 2021, Michigan Governor Gretchen Whitmer announced a pilot initiative that will help achieve both these goals by developing the first wireless charging infrastructure on a public road in the United States. The Michigan Department of Transportation (MDOT), which is providing $1.9 million for the project, selected a consortium of companies to design and build a one-mile stretch of road in downtown Detroit that will allow electric vehicles to wirelessly charge while in motion and stationary.

The project team will be led by Electreon, a leading provider of wireless charging solutions for electric vehicles. Jacobs will provide project management and design services, and NextEnergy, a Detroit-based nonprofit organization and business accelerator for alternative and renewable energy, will head stakeholder and partner engagement. In addition, the pilot will be hosted by the Michigan Central Innovation District and supported by Ford Motor Co.; the City of Detroit; and DTE Energy, a Detroit-based diversified energy company involved in developing and managing energy-related businesses and services.

“As the world transitions to the future of electrified transportation, cities and communities are seeking and adopting green economic-centric models as part of the transformation,” says Ron Williams, senior vice president and general manager for the Americas at Jacobs. “This innovative pilot project aims to demonstrate efficient vehicle operability to prove the viability of wireless electric vehicle charging in the United States.”

Electreon’s wireless electric road technology is based on induction, with copper coils installed under the roadway and vehicles. Electreon’s wireless electric vehicle charging solutions can be used in stationary, dynamic (in-motion) or semi-dynamic applications, including queuing or parking lanes, at loading docks or on highways. The system transmits energy through the air from one coil to another. Common examples in daily life are an inductive kitchen stove and wireless phone charging. The coils transfer energy to a receiver that can be mounted under any type of electric vehicle, such as trucks, vans, buses and cars. The system supports a broad range of uses and addresses several shortcomings in electrification related to battery limitations, charging needs and vehicle asset use. 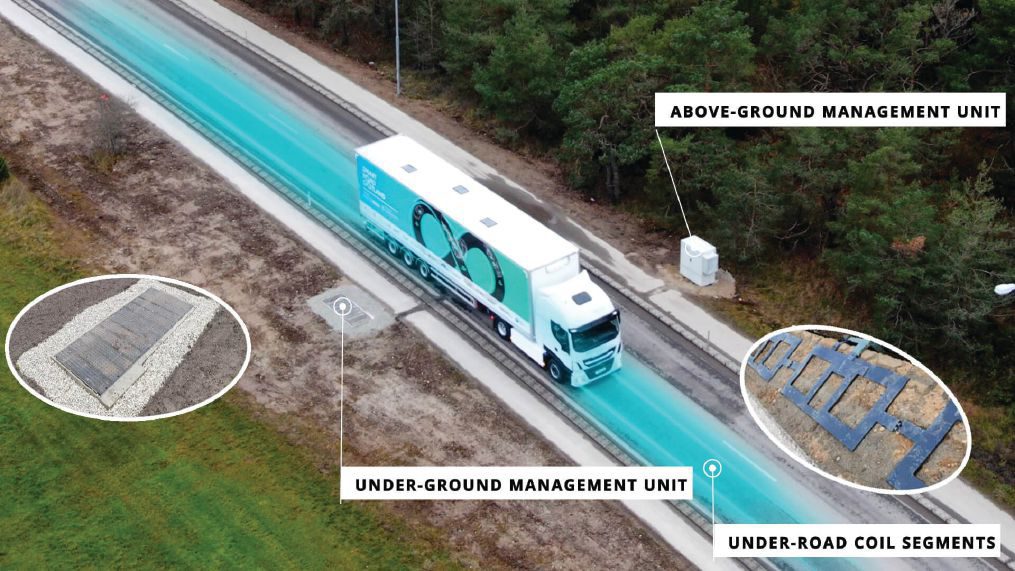 Electreon’s wireless electric road technology is based on induction, with copper coils installed under the roadway and vehicles. The system’s management unit can be aboveground or underground where real estate is limited.

Wireless charging can be installed anywhere, as it doesn’t have the same limitations as conductive (plug-in) charging. The technology can be deployed along public roads, tollways, motorways, bus routes, taxi lanes, in parking lots and at commercial depot centers. This enables frequent “top-up” or opportunity charging throughout a fleet’s operational hours—typically during the day—and converts idle time into charging opportunities. The same technology can be installed for static (stationary) charging, which occurs when a vehicle is parked at a depot or a garage or when it’s stopped. The technology reduces the need for large batteries and extensive grid connection capacity, flattening the electrical demand curve, all of which significantly lowers costs and enables better energy management.

1. A management unit (the “brain”) located at the side of the road allows power to be transferred from the first coil (buried under the road surface) to the secondary coil inside a receiver pad installed under the vehicle chassis. The management unit can be aboveground or underground where real estate is limited. 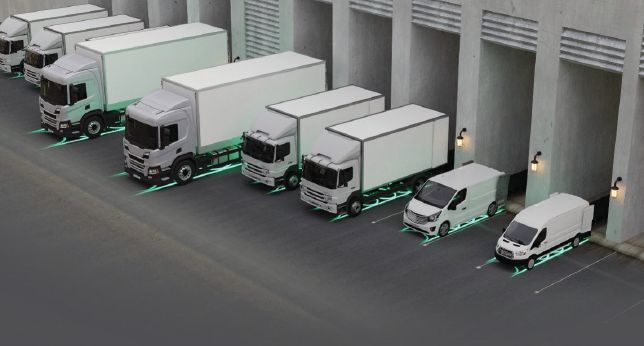 Wireless electric road technology also can be used for static (stationary) charging, which occurs when vehicles are parked. (Electreon)

2. The roadway infrastructure consists of the in-road copper coils that transfer power to the vehicles’ receivers. The road is safe for drivers, pedestrians and wildlife. Each individual coil is activated only when a licensed vehicle passes over the coil under the roadway or under a wireless charging zone. Otherwise, the technology is completely passive and will never transfer energy or radiation to unlicensed vehicles, people or animals passing by. Thorough safety testing has been undertaken to identify safety risks, safe-practice routines and energy-transfer control when the charging is active. Testing also ensured that the technology, which adheres to the highest IEC, SAE and CE safety standards, is completely safe for humans and the environment.

3. The vehicle receivers transmit energy directly to the vehicle battery and engine.

The real-time management system monitors and manages optimal electric vehicle charging at fleet scales, allowing for control oversight. What makes Electreon’s system unique is that the architecture is built for scale: one management unit can charge up to 100 meters of roadway. 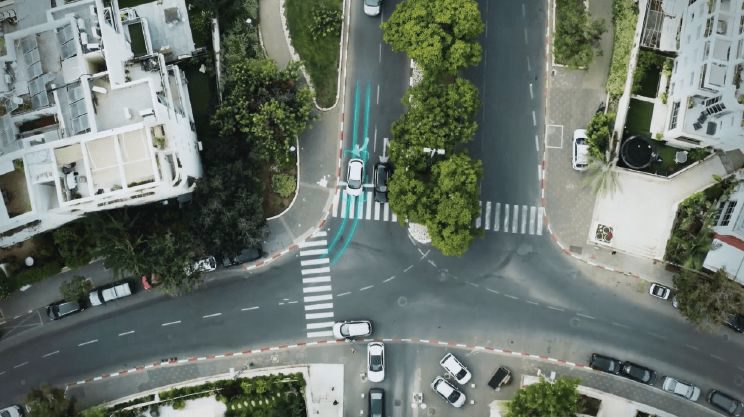 “The purpose of the Detroit pilot project isn’t just to prove the technology works in the United States, but to ultimately develop the tools and ecosystem needed to scale up the technology for additional projects,” explains Tongur. “Many U.S. states have expressed interest in electric roads and wireless charging after seeing Electreon’s success in other countries.”

The Detroit pilot is expected to develop one of the most diverse electrified roads in the world built and operated in an urban setting, but Electreon has a history of completing successful projects on public roads in Sweden, Germany, Italy and Israel. For example, the Smartroad Gotland Project began operations in early 2020 and is a pre-commercial demonstration project of an electrified road in Sweden. Based in the town of Visby on Gotland Island, the project aims to build knowledge and create possibilities for a large-scale development of electric roads throughout the country.

The project is one of four electric road demonstration projects currently funded by the Swedish Transport Administration to reach a national target of installing 2,000 kilometers of electrified roads in Sweden by 2030 and achieving net-zero emissions by 2045. The project demonstrates how an electric bus and an electric truck can charge from a road while driving in a real-world environment and how wireless charging is a viable option to provide cities with a convenient, cost-efficient and sustainable way to shift toward an electric future.

Similarly, in September 2020, Electreon partnered with the City of Tel Aviv and the Dan Bus Company to create the first operational, public wireless electric road system for Israel’s urban environment. The project includes a wireless electric charging station at the Tel Aviv University Train Station bus terminal, which charges the stationary electric bus when passengers are boarding and disembarking the vehicle. This charging strategy makes optimal use of idle time at the first stop of the route to charge the bus.

The newly electrified bus line creates a seamless, multimodal public transport experience for students traveling between Tel Aviv University Train Station and the nearby Ramat Aviv neighborhood. It also offers a viable alternative to the use of private vehicles in a congested area. The project includes wireless dynamic charging on the electric road as well as stationary electric bus charging to reduce service downtime.

In addition to the MDOT pilot project, Jacobs and Electreon recently announced they’ll join forces on select wireless electric vehicle charging projects across the United States for industry-leading fleet operators, including city and state authorities. Fleet owners worldwide are under pressure to decarbonize their operations, and shifting to zero-emissions vehicles is a key element of this effort. Some fleet owners have already begun the journey toward a green fleet. According to Jacobs, more than 200 U.S. transit agencies already are operating, ordering or have received funding for zero-emissions vehicles.

Jacobs is advising clients on how to convert to electric vehicles through its strategic Green Fleets initiative, and the company recently acquired mobility analytics company StreetLight Data and edge-computing analytics provider BlackLynx. Also, in November 2021, Jacobs announced a strategic relationship with Microgrid Labs, a software and consulting company specializing in planning commercial fleet electrification and microgrids. All these companies will play a role in the MDOT pilot project.

“Jacobs shares MDOT’s vision of the electric smart mobility revolution and the role of inductive wireless charging as a key electrification solution,” says Williams. “We’re helping cities around the world move toward their net-zero goals through alternative fuels and green transportation.”

Adds Tongur, “We expect the Michigan project to open the door to other DOTs, other roads in Michigan, and other fleet operators to electrify fleets and roads. But such technology expansion will evolve from a need. It will work for vehicle operators and infrastructure owners, because these systems will be shared and become more cost-effective as they expand.”

Planning and design for the MDOT pilot project are underway. The initial deployment is expected to be completed in the latter half of 2023.