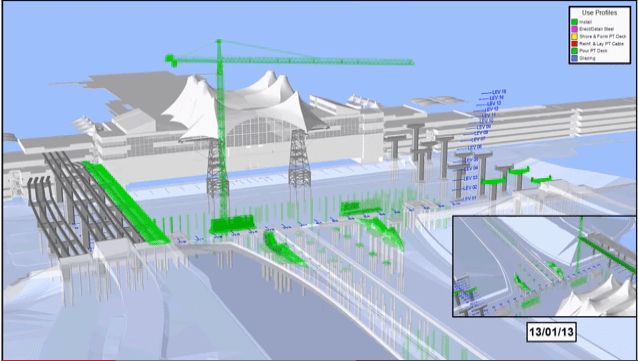 Denver International Airport (DIA) is rolling out a new facility management program designed to make the day-to-day operation and maintenance of the entire airport more efficient and predictable. DIA is using Building Information Modeling (BIM) technology to combine multiple databases containing facility data into one central location. With BIM, DIA personnel are now able to access information on when an item was purchased, the cost, the item’s specific location, when it was installed, the routine maintenance schedule for the item and other information important to maintaining airport facilities.

“Using Building Information Modeling to integrate all of DIA’s data management platforms into one centralized system allows all of our airport divisions to access the same information needed to manage the airport’s current and future assets,” said Dave LaPorte, deputy manager of aviation for Airport Infrastructure Management. “The implementation of BIM technology for our entire facility allows DIA to elevate the quality of our airport operations, improve our intelligence about existing facility conditions and reduce the staff time needed to make repairs.”

With BIM, DIA can see the airport facilities and all of its components, from office furniture to pipelines, in a digital format. BIM has the ability to show the location of an object, it’s spatial relation to other nearby objects, quantities, timeline for an object and properties of the building components (such as the Manufacturers’ suggested maintenance schedule). This provides DIA with the ability to automatically maintain the facility by identifying and setting maintenance schedules for specific items.

Because the exact locations of all airport assets are included in the system, it also has the added benefit of enhancing emergency response. DIA first implemented the BIM integration on the Hotel and Transit Center Program, which includes a 519-room Westin Hotel, an open-air plaza, and a transit center for the new East Rail Line and all RTD buses.
An example of the BIM technology used to model the Hotel and Transit Center Program can be viewed in this video:

Seeing the benefits of BIM on the Hotel and Transit Center, DIA began work on the enterprise-wide undertaking in November 2009 and developed DIA specific standards and manuals. The BIM system includes models for the three existing concourses, the airport office building, Jeppesen Terminal, the seven five-story parking garages, and four aircraft rescue and firefighting stations.

Denver International Airport is the 13th-busiest airport in the world and the fifth-busiest airport in the United States. With more than 50 million passengers traveling through the airport each year, DIA is one of the busiest airline hubs in the world’s largest aviation market. DIA is the primary economic engine for the state of Colorado, generating more than $26 billion for the region annually. For more information visit www.flydenver.com